Members of Zion Hill Missionary Baptist Church crowded the aisle to watch the church mortgage burn. Some recorded the ceremony on their phones while others clapped, shouted and ran throughout the sanctuary. With the help of church deacons and ministers, Teresa Lee-Robinson, executive director of the church and daughter to Pastor David Lee, lit the […] The post Zion Hill Missionary Baptist Church celebrates 61-year anniversary with mortgage burning ceremony appeared first on Indianapolis Recorder. 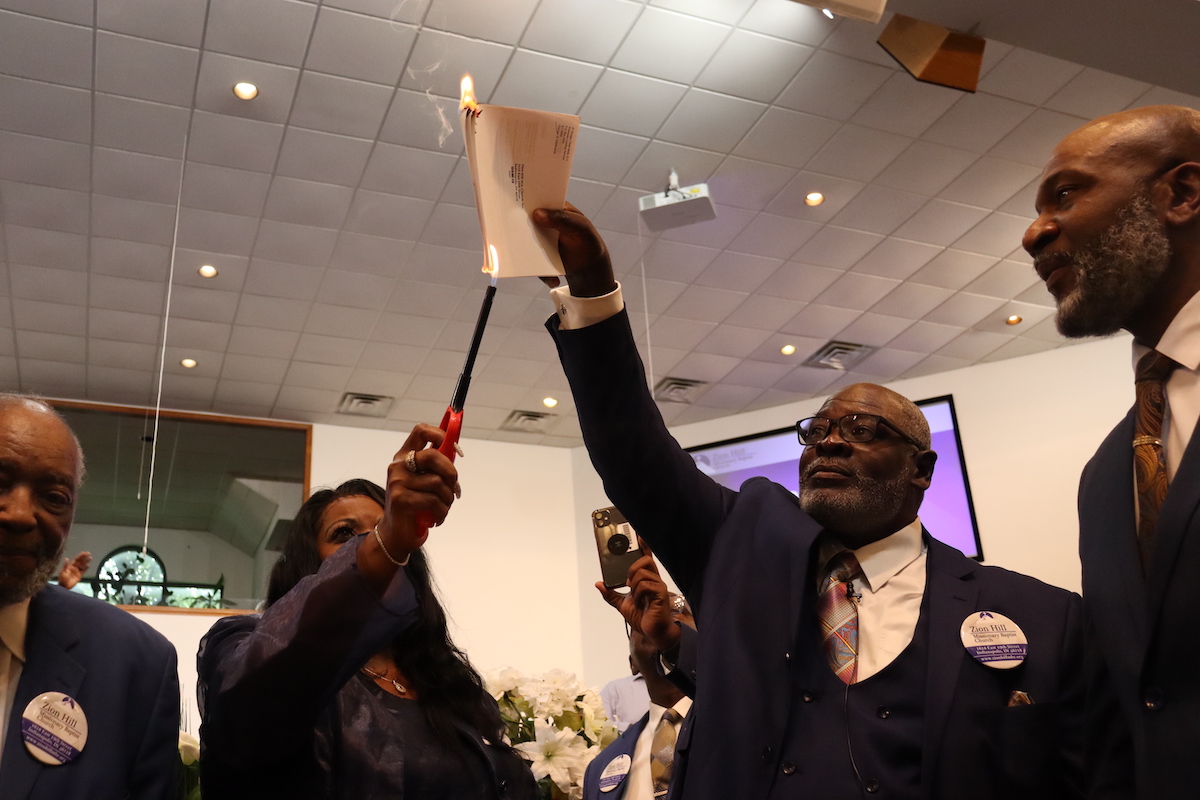 Members of Zion Hill Missionary Baptist Church crowded the aisle to watch the church mortgage burn. Some recorded the ceremony on their phones while others clapped, shouted and ran throughout the sanctuary.

With the help of church deacons and ministers, Teresa Lee-Robinson, executive director of the church and daughter to Pastor David Lee, lit the mortgage and held it up for everyone to see.

“The fact that my dad let me burn it, I felt honored,” she said.

The church began in September 1961 with only seven people. Zion Hill’s first house of worship was a small storefront building at 1734 Cornell Ave. The church has moved and expanded several times since to accommodate its growing congregation.

Church members showed their excitement and pride for their church through their color-coordinated royal blue, black and white attire, playing the tambourine or by just swaying back and forth in sync with the beat of the drums.

Many guests and friends attended the service to celebrate with Zion Hill, including Indiana state Rep. John Bartlett, and executive director of the Martindale-Brightwood Community Development Corporation, Amina Pierson.

Longtime member of the Martindale-Brightwood community, Shirley Webster, congratulated the church on their accomplishments.

“This is such an example of God’s wealth,” she said. “I am happy for you all.”

Zion Hill Missionary Baptist Church plans to remodel and expand its daycare in the future to serve the growing number of children.

Contact religion reporter Abriana Herron at 317-924-5243. Follow her on Twitter @Abri_onyai. Abriana is also a Report for America corps member with The GroundTruth Project, an independent, nonpartisan, nonprofit news organization dedicated to supporting the next generation of journalists in the U.S. and worldwide.

Report for America, funded by private and public donors, covers up to 50% of a reporter’s salary. It’s up to the Indianapolis Recorder to find the other half through local community donors, benefactors, grants, or other fundraising activities.

If you would like to make a personal, tax-deductible contribution to his position, you can make a one-time donation online or a recurring monthly donation via Indianapolis Recorder Newspaper/RFA.

Inflation may sting. TIPS may ease the pain

‘A new way to do the same thing’: Four churches collaborate...

Water shut off still a possibility at 4 city apartments