Data News Staff Edited Report On October 4, 2022, the groundbreaking ceremony at the site of the new YWCA facility in Mid-City marked a vital step in the return of crucial programs for women, children, [...] 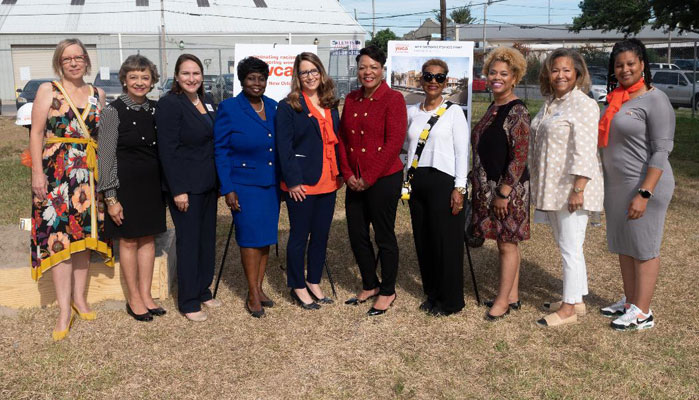 On October 4, 2022, the groundbreaking ceremony at the site of the new YWCA facility in Mid-City marked a vital step in the return of crucial programs for women, children, and seniors in the Greater New Orleans area.

In 2005 when Hurricane Katrina’s floodwaters destroyed the YWCA building, they also washed away the YWCA’s hallmark services, including domestic violence and rape crisis counseling, financial education, daycare, after-school programming, and other offerings to enrich youth and empower women. These programs had been an integral part of the YWCA’s contributions to the Greater New Orleans area since the chapter was founded over a century ago.

Now, thanks to the tireless efforts of the YWCA Board of Directors, committed volunteers, and fundraising partners, the YWCA will have a permanent home at the corner of South Norman C. Francis Parkway and D’Hemecourt Streets.

“This rebuilding effort has been a journey marked by faith, despite the many obstacles encountered throughout this process,” said Loyce Pierce Wright, President of the New Orleans YWCA Board of Directors. “For one hundred years, the YWCA of Greater New Orleans, has been a beacon of light for women and children in our communities, and we knew that we could not allow that light to be extinguished. And so, this groundbreaking is emblematic of a rebuilding effort marked by faith. In this new state-of-the-art facility, once again, women will be able to turn to us for support, guidance, and advocacy. Children will be able to receive assistance in their growth and overall learning in a safe, nurturing environment. Today is an example of our community’s collective power and its prioritization of caring for women and girls. With this groundbreaking, we are on the path toward achieving what many deemed impossible. We will continue to chart the course towards eliminating racism and empowering women.”

The return of the YWCA has been a 17-year journey fueled by these determined volunteers despite fundraising challenges. Due to their fortitude, the project is now moving forward. Through lengthy negotiations with FEMA, a grant from the State of Louisiana, support from Mayor LaToya Cantrell’s office and other fundraising efforts, the YWCA Board and volunteers managed to secure the funding needed for the $10 million construction budget.
“Today is a huge win for women of all ages, ethnicities, and demographics across the City of New Orleans,” said Mayor LaToya Cantrell. “For over a century, YWCA of Greater New Orleans has tirelessly served the women of this community, and while they have had no true place to call home since the devastation by Hurricane Katrina, this is a major step to ensuring the services they provide can continue to positively impact the women of our great City. This new state-of-the-art community center will provide quality mental and maternal health services, as well as jobs for low-to-moderate income individuals, falling in line with the overall vision of the Mayor’s Office of Youth and Families, which I created as one of first acts as Mayor, to provide much needed support to marginalized and underserved communities. We will continue to make the necessary and critical investments in our women and children to ensure we are moving this City forward and creating a more inclusive and equitable environment in which all people can live and thrive.”

Trapolin-Peer Architects was chosen as the design team for the project back in 2009. The New Orleans firm drew on its extensive background in early head start/preschool design to design the state-of-the-art two-story, 16,967 square foot facility. The firm consolidated the Y’s multiple buildings to create one cohesive space the YWCA and the community can be proud of. Trapolin-Peer designed the women’s center and daycare spaces with the Y’s core mission to help women in mind. There are also multiple training spaces, resource areas, staff offices and flex spaces that can be used for a range of educational programs including parenting classes and counseling.

“While the loss of their buildings and staff was a major challenge for the YWCA, it gave them the opportunity to re-imagine and re-organize the facility into a safe space for learning and counseling for the next generation,” said Gabriel Virdure, Associate at Trapolin-Peer Architects “Consolidating the buildings gave the YWCA the ability to determine how to best utilize their property while providing a familiar presence in their Mid-City neighborhood….The YWCA is about resilience, and we hope this building will be a testament to their determination and dedication to the community.”

“Equity in education starts before kindergarten,” said Paula Peer, Principal/Architect at Trapolin-Peer Architects. “There is nothing more valuable and empowering to a mother than to have a trusted pre-school/daycare. The YWCA Women’s Center is also an important part of the building’s programming, creating a hub for all of the Y’s services to the community.”

“The long-awaited return of YWCA programs and services brings hope to hundreds of women, girls and families in the Greater New Orleans area who are suffering from the ravages of domestic violence, rape, child abuse/neglect or elderly isolation,” said Gail Glapion, Executive Director (ret.) YWCA of Greater New Orleans.

Construction on the new YWCA will begin later this month with plans to open the facility in late 2023. VPG Construction is serving as the General Contractor. Real Estate Developer and Investment Firm, Kupperman Companies helped to secure the gap funding and Real Estate Law Firm Steeg obtained the funding from the State Office of Community Development for the project.

Election Day is Nov. 8th Get Out and Vote

Krewe de Pink Fundraiser in Support of Breast Cancer Re...

Tigers and Jaguars meet up in a historic LSU vs. Southe...