Although breast cancer disease affects hundreds of thousands of individuals yearly, it disproportionately affects black people. Here's what you should know. The post Why Breast Cancer Is A Black Health Issue (And Resources for Folks in MO & KS) appeared first on Kansas City Defender. 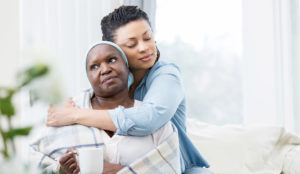 Breast Cancer Awareness month is in October, but that doesn’t mean breast cancer stops there. Although the disease affects hundreds of thousands of individuals yearly, it disproportionately affects Black people based on a few different factors. This is what you should know about what causes disparities, how to detect breast cancer, and how to prevent it.

As defined by Oxford Language English Dictionary, cancer is a disease caused by an uncontrolled division of abnormal cells in a part of the body. Breast cancer is the most common type of cancer, with an expected 290,560 new cases in the United States in 2022 alone. Of these new diagnoses, 36,200 cases are estimated to be Black women. This means, as predicted by the American Cancer Society, that there is an estimated 6,800 casualties caused by breast cancer.

Why does cancer affect Black communities more than others? Studies indicate that the reason is not that Black people are more susceptible to cancer, but rather societal inequalities such as structural racism, socioeconomic status, varying other health conditions, and mistrust in the medical system.

Structural racism– ideas and actions that have been built into public policies, institutional practices, and other cultural and societal representation in order to preserve racial inequity–often prevents Black individuals and communities from receiving quality medical care. Redlining has previously and currently segregated Black communities from gaining middle-class wealth and adequate affordable medical care. Historically redlined areas (the “Troost wall” in Kansas City is considered one of these historically redlined areas) are associated with having 2 times higher breast cancer mortality rates than other surrounding areas.

Individuals and families of a lower social/economic class are at an increased risk. Those without health insurance are more likely to be diagnosed with late-stage cancer and have a higher risk of cancer death when compared to people who have private insurance. Luckily, programs such as the Affordable Care Act (now known mainly as Obamacare) which was passed in 2010 have helped relieve the financial burden of health insurance and reduced the number of people who are uninsured, particularly those in lower social and economic classes.

Health conditions and individual lifestyle choices are additional contributing factors to cancer risks. chronic diseases, which tend to be common in Black communities due to disproportionate poverty and discriminatory medical practices, can lead to risk. Conditions such as diabetes, heart disease, hypertension, stroke, etc. lead to an increased risk of several cancers (not just breast cancer). Modifiable factors that increase the likelihood of breast cancer (according to the American Cancer Society) include weight gain after age 18, being overweight or obese postmenopausally, menopausal hormone therapy (combined estrogen and progestin), alcohol consumption, and physical inactivity.

A large element in Black communities avoiding health care is medical mistrust. Medical mistrust is the distrust of health care providers, the health care system, medical treatments, and the government as a steward of public health. This is a result of systemic racism and is a partial reason why there are health disparities between white people and people of color. Mistrust in providers is associated with lower cancer screening and the underrepresentation of Black individuals in clinical trials. It also causes people to not seek out preventative measures/cancer treatment, and/or recovery resources.

Cancer prevention is actions taken to lower the chance of getting cancer. Our genes, lifestyle, and the environment around us work together to increase or decrease our risk of getting cancer. Each person’s cancer risk is made up of a combination of these factors.

Modifiable factors such as healthy nutrition and physical activity heavily decrease the risk of individuals getting any type of cancer. Having a healthy diet and a high consumption of non-starchy vegetables is associated with a lower risk for hormone receptor-negative breast cancers (which is especially relevant for Black women who have a higher proportion of hormone receptor-negative breast cancer). Smoking is a serious factor in contracting/increasing the risk for every type of cancer. Tobacco products of any kind (including e-cigs and vaping devices) increase exposure to toxins, carcinogens, and other hazardous materials.

Screening mammography (a low-dose x-ray procedure) can detect breast cancer at an early stage when treatment is often less intensive and more successful. The American Cancer Society guidelines recommend that women at average risk begin screening at 45 years of age, with an option to begin at age 40.

If a biological parent has previously had breast cancer or there is a trend of cancer within your family consult with your doctor on how to get early screening for the BRCA test, which tests the plausibility of an individual getting cancer based on genes.

Self-exams can be done at home and only take a few minutes to do. Becoming familiar with your chest is important, as many women report finding the first signs of breast cancer through a self-exam. Even so, self-exams should not be a substitute for an exam done by a doctor, so please consult with your doctor if you have concerns. Check with your doctor on how to properly perform a self-exam.

Resources for those in Kansas and Missouri

For a list of medical resources in Kansas City, you can visit the Central Kansas Cancer Center website for general information about all types of cancer.

If you currently have or know someone who has breast cancer, urge them to seek out support. Information for breast cancer support groups, events, a breast cancer helpline, and volunteer opportunities can be found on the Living Beyond Breast Cancer website or their Facebook.

The American Cancer Society also has resources for Kansans and Missourians going through breast cancer, such as transportation to surgeries, and lodging.  Information about breast cancer advocacy (such as Relay for Life) and other volunteer opportunities can also be found on their website.

The post Why Breast Cancer Is A Black Health Issue (And Resources for Folks in MO & KS) appeared first on Kansas City Defender.

How Right-Wing Extremists Are Seizing Control of KC’s Police...

Beneath the City: Black Business Owners Turn History into...