By Bob Carlton | bcarlton@al.com Dolester Miles was one of the first people Frank Stitt hired when the celebrated Birmingham chef opened Highlands Bar and Grill, his French restaurant with a Southern soul, in 1982. Miles and her sister Diane George even helped sew the original curtains that hung in the front windows of the restaurant. […] 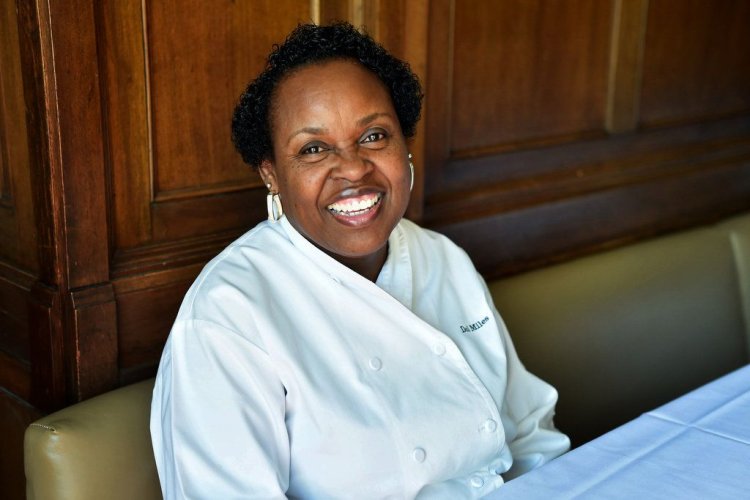 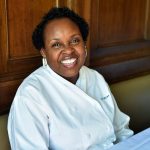 Dolester Miles was one of the first people Frank Stitt hired when the celebrated Birmingham chef opened Highlands Bar and Grill, his French restaurant with a Southern soul, in 1982.

Miles and her sister Diane George even helped sew the original curtains that hung in the front windows of the restaurant.

Now, after nearly 40 years working alongside Stitt and his wife, Pardis, in their four Birmingham restaurants — Highlands, Chez Fonfon, Bottega and Bottega Café — the self-taught, James Beard Award-winning pastry chef has put away the mixing bowls and cake pans and is ready to start working on her bucket list.

“You know, my bucket list is this long,” Miles says, spreading her arms. “Whether I get to any of them, I don’t know. (There are) a lot of different places that I want to go.”

Miles quietly retired at the end of December, and her extended family at the Stitt Restaurant Group have been saying their goodbyes.

“I just feel like I worked at the greatest restaurant for the greatest chef, and I appreciate everything Frank has done for me,” Miles says. “I couldn’t ask for a better job.

“I guess that’s why I stayed so long because we get along. I don’t think I could have gone anywhere else and worked. Everything was top-notch. And it was just an experience I’ll never forget.”

Neither will Miles — more affectionately known as “Dol” — ever be forgotten.

“Dol has brightened thousands of celebratory occasions with her fabulous desserts,” Pardis Stitt says. “In her quiet and graceful manner, she’s set a standard of delicious excellence which has become a hallmark of our restaurant experience.”

‘Fun Time To Be In The Kitchen’

Sitting together at a table on the patio outside Bottega, Miles and Frank Stitt tease and praise each other as they reflect on their nearly four decades together.

“I think we were a good team,” Stitt says. “I think that’s maybe something that’s hard for people to understand is how much of what we did for the last almost-40 years was because we were a team.”

The youngest of five children, Miles grew up in Bessemer, where she got an early education in dessert-making while helping her mother, Cora Mae Miles, and aunt, Queen Ester Harris, bake sweet potato pies and German chocolate cake.

“My aunt could cook everything, but I would rather be in the kitchen when they were doing something sweet,” Miles remembers. “They were sisters, and that’s what brought them together — especially holidays and on Sundays. And that was just a fun time to be in the kitchen.”

She found her true passion, though, when she went to work in the pastry kitchen at Vincent’s restaurant in Riverchase.

“That’s when I realized what I really wanted to do,” she said in an earlier interview with AL.com. “To take butter and flour and make something good and everybody likes it — it’s just exciting.”

In 1982, when she came to work for Stitt at Highlands, she started as garde-manger, or pantry chef, and was responsible for preparing salads and cold appetizers.

Highlands may have been in its infancy, but she could already sense that she was part of something special.

“Those were the best days to me,” Miles says. “We all got along, and it was exciting because I had never (worked) garde-manger before, to tell you the truth.

“I don’t know if you ever knew that, but you taught me all this stuff,” she adds, glancing across the table at Stitt. “And half the food, I didn’t know what it was. It was just a learning experience. We had a good group of people.”

‘A Talent For Pastry-Making’

In those early years, Highlands outsourced most of its desserts — including cheesecakes from Stitt’s mother, Marie — but later, Miles and her cousin Verba Ford started preparing them.

“It was clear that Dol had a talent for pastry-making and baking,” Stitt says. “I would travel and have a dessert somewhere . . . and we would figure out how to do it.”

So, in 1988, when Stitt opened his Italian-inspired Bottega restaurant, he made Miles his pastry chef for both Highlands and Bottega. (Chez Fonfon, his French bistro, opened next door to Highlands in 2000.)

Her luscious and lovely desserts — including her lemon meringue tart, strawberry cobbler and chocolate pot de crème — soon became legendary around Birmingham and beyond.

Because Miles and her pasty team typically arrived at 5:30 in the morning to begin their workday, though, they were long gone by the time guests indulged in their after-dinner desserts.

“Most of the time, when I would come in and see the waiters, they would tell me how the customers enjoyed something,” Miles says. “But you could kind of tell when you come in and all of it is gone.”

None of her creations, though, achieved the status of her coconut-pecan cake, a majestic confection of finely ground toasted coconut and pecans served with a creme anglaise. It was, is and always will be her signature dessert.

In his “Bottega Favorita” cookbook, Stitt called it a cake for “indulgent occasions,” but it’s really a cake for all occasions — weddings, anniversaries, birthdays, graduations, Thanksgiving, Christmas and Easter.

Miles estimates she baked thousands of them over the years.

“People tell me that they don’t even like coconut and they like that cake,” she says. “I wish I knew how many I made.”

‘Paying Down A Debt Of Pleasure’

Miles went about her work with little fanfare, but the rest of the country eventually began to take notice of her talent for taking traditional Southern desserts and elevating them into something extraordinary when, in 2016, she was named one of six finalists for the James Beard Award as the country’s most outstanding pastry chef.

“Ms. Miles is a great example of a hard-working culinary professional who has, for three decades, kept her head down, done her work and not sought recognition,” the Southern Foodways Alliance’s John T. Edge, long a champion of Miles and her culinary artistry, said at the time.

“With this nomination, it’s as if a long overdue debt is being paid. . . . It’s as if we’re finally paying down a debt of pleasure we owed Dolester Miles.”

Two years later, in 2018, that debt was paid in full when Miles won the James Beard Award in her third year of being nominated. That same year, Highlands Bar and Grill also was selected the most outstanding restaurant in America after being a finalist for 10 years in a row.

“I’m just sitting back here all laid-back, and then I’m like, ‘Oh, my God, did I hear that right?’” she said following the ceremony. “Frank was like, ‘Get up, Dol, get up.’

“I couldn’t move for a minute there,” she added. “I was just in such a shock because I was not expecting for them to call my name.”

The cards and letters started pouring in, so much so that Pardis Stitt joked they needed to get Miles a separate mailbox. Many came from people Miles had never met.

“I still have to pinch myself,” she says. “Did I dream that?”

As she walks through the kitchen at Bottega before lunch one morning, Miles exchanges hellos and miss-yous with some of the restaurant family she hasn’t seen since she hung up her chef’s coat for good a couple of months ago.

“(It) almost made me cry,” she says. “I mean, that was my team back there. Most of us have been together a long time, and we share ideas and stuff. And I miss ‘em. I miss everybody.”

Miles may have retired, but her cakes and tarts and cobblers will live on — at Bottega and Bottega Café, at Chez Fonfon, and when it reopens, at Highlands Bar and Grill, where it all began.

And they’re in good hands. The pastry team at the Stitt Restaurant Group learned from the best, after all.

“I’m passing the torch,” Miles says. “They can handle it. They’re great.”

This Tech Will Cut The Cost Of Self-funded Health Coverage

3-Year-Old and 3-Month-Old Die After Tree Falls on Birmingham...