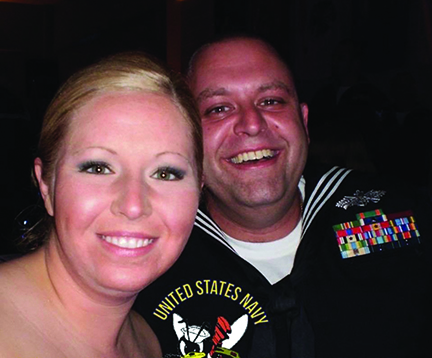 NASHVILLE, TN — The Tunnel to Towers Foundation is honored to announce it has paid, in full, the mortgage on the home of La Vergne Police Detective Lieutenant Kevin Stolinsky.

“We are here to celebrate everyday Americans who do amazing things, and there is nothing more amazing than volunteering to serve our country or community. I am honored to announce that Tunnel to Towers, with the support of Americans across this great country, will now be taking care of your family the way your husband took care of us,” said Siller.

Detective Lieutenant Stolinsky died on November 12, 2021, due to a job-related medical emergency.

Detective Lieutenant Stolinsky began serving his community with the La Vergne Police Department in 2001 as a dispatcher and worked his way through the ranks to achieve detective sergeant. He was posthumously promoted to detective lieutenant.

He also served his country in the U.S. Navy including being a US Navy Seabee and deployed as part of Operation Iraqi Freedom in 2005, Operation Enduring Freedom in 2009, and Africa Deployment in 2015.

Detective Lieutenant Kevin Stolinsky is survived by his wife, Casey Stolinsky and their daughter.

The Tunnel to Towers Fallen First Responder Program pays off the mortgages for the families of law enforcement officers and firefighters who are killed in the line of duty with young children.

The Tunnel to Towers Foundation has set a goal to reach 1,000 mortgage-free homes delivered across the country to our nation’s military and first responders, by the end of the year.

Join us on our mission to support these American heroes and their families by going to T2T.org and donating just $11 per month.

The Tunnel to Towers Foundation is dedicated to honoring the sacrifice of FDNY Firefighter Stephen Siller, who laid down his life to save others on September 11, 2001. For more than 20 years the Foundation has supported our nation’s first responders, veterans, and their families by providing these heroes and the families they leave behind with mortgage-free homes.

For more about the Tunnel to Towers Foundation and its commitment to DO GOOD, please visit T2T.org.

The post Tunnel to Towers Foundation Pays Off Mortgage for Fallen La Vergne Officer  appeared first on The Tennessee Tribune.

Aretha “Susie” Mays Named Caregiver of the Year by the...

Health Care Firms Were Pushed to Confront Racism, Now Some...

Get Your Tickets to Don’t Look Black-Nashville Show Ends...