Tulsa Public Schools Board of Education voted 4-3 Wednesday, Nov. 16., night to postpone voting on redistricting. The vote capped weeks of contentious debate over whether and how school districts across Tulsa should be redrawn. The post Tulsa School Board Postpones Redistricting Vote appeared first on The Oklahoma Eagle. 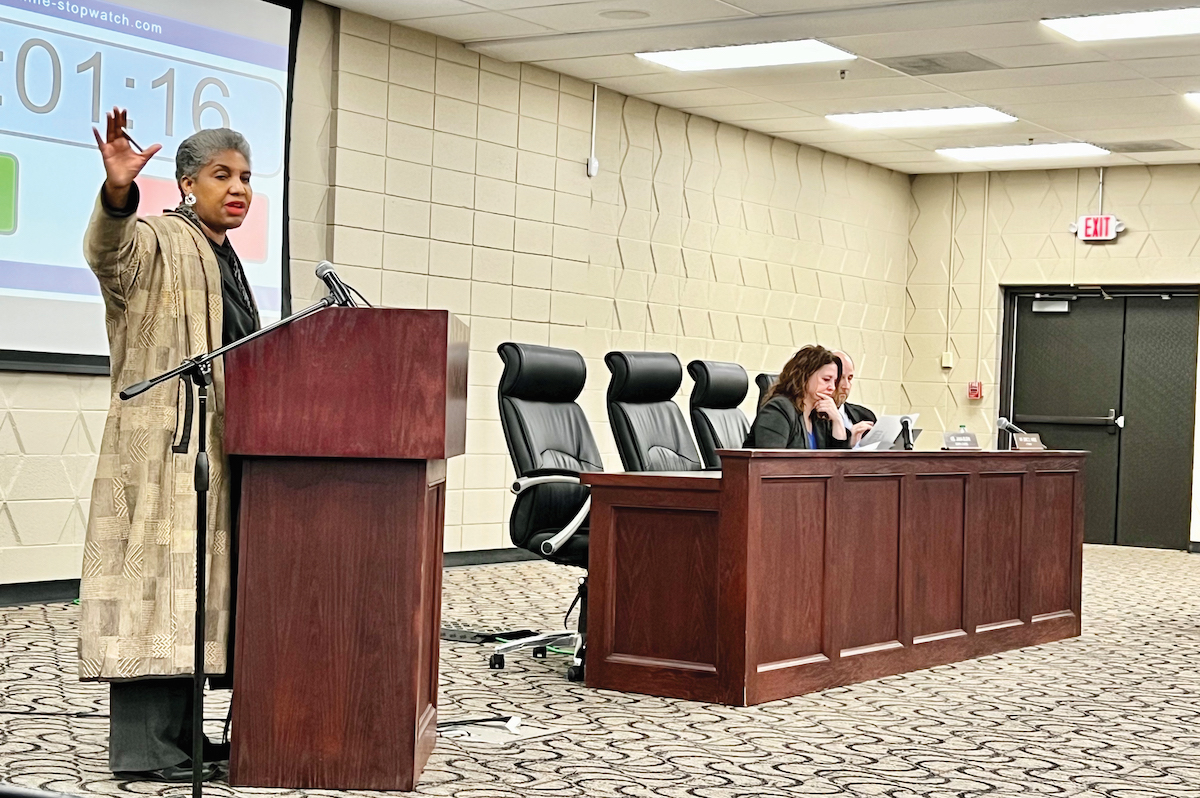 “I can truly say that we’re not ready to complete this process,” board member Jennettie Marshall told Wednesday’s meeting. “We are nowhere near ready.”

Marshall represents District 3, which encompasses the majority of the public schools in North Tulsa. She and E’Lena Ashley, the only two African Americans on the board, sided with the majority in Wednesday’s vote. Board President Stacey Woolley and member Jerry Griffin also voted to table the balloting on redistricting.

The TPS board held the special meeting to receive public comments regarding redistricting. Around 50 parents and residents of TPS districts attended, and nearly all expressed frustration with the board’s failure to provide the insight necessary to determine if the proposed redistricting maps would best serve the interest of voters.

“The problem was there was no great outreach from Tulsa Public Schools to involve the public,” state Rep. Regina Goodwin told the Oklahoma Eagle. She has been following and engaging in the redistricting discussion, since many of the impacted schools are in her House District 73.

State law requires school districts – whose board seats are divided among wards, zones or districts – to review and redraw board seat boundaries the year after the U.S. Census results are submitted to the U.S. president. Since President Joe Biden did not receive the and approve the Census data until 2021, the public school board could wait until 2022 to approve. For TPS, the board’s redistricting must be completed by Dec. 31.

With Wednesday night’s vote to table a vote, the process of determining new districts goes back to the board’s ad hoc redistricting committee to work with the Indian Nations Council of Governments (INCOG) – a voluntary association of local and tribal governments in the Tulsa metropolitan – on additional options that consider feedback from the community and board members. The board’s ad hoc redistricting committee consists of board members Woolley, Marshall and John Croisant.

Title 70 compliance must be met between Aug. 1 and Dec. 31, allowing sufficient time for school boards to take the requisite actions.”

As presented, the issues appeared to be singular: that the board’s responsibility to file a “Resolution Authorizing Election” was contingent upon approval of one of the proposed redistricting maps.

TPS staff attorney Rob Gallant addressed board members’ questions at the meeting, which helped clarify the board’s responsibility and any related impact to only acting on Title 26.

Wednesday’s decision to table discussion represented a small victory for Marshall and others battling proposals that would reduce the representation of North Tulsa on the Board. Marshall and Goodwin worked to preserve the integrity of public school representation in Tulsa Public Schools’ redistricting process.

In February, Tulsa Superintendent Deborah Gist told the school board that state law required redistricting due to the 2020 census.

In the same meeting, the Board hired INCOG to complete the population shift analysis and prepare alternative maps for redistricting. When the maps were unveiled in early September, Marshall said she immediately knew something was amiss. Several historically North Tulsa-represented schools were proposed to be moved into other districts. That sparked a furor among North Tulsans who did not want oversight of their public schools taken from their elected school board representatives and placed in different districts.

The assortment of plans and maps – initially six but later growing to 12 – made it difficult for the public and board members to understand the plans’ differences, and what impact they would have on the community.

Goodwin had complained to the board weeks earlier that the plans had “no particular guidelines.”

Darryl Bright, a community activist and founder of Citizens United for a Better Education System (CUBES), also told the board that the maps “drown you in information.”

The original six maps had moved as few as 7% to as much as 35% of the total TPS district’s population out of their existing districts. Consequently, schools changing districts ranged from as few as five on some maps to more than three dozen on others. Later maps released reflected a gradual attempt to satisfy concerns by reducing the number of schools moving to another district. But they also had the effect of creating more confusion and frustration.

Board members also had complaints. When Ashley, who represents District 2, asked which schools had been moved in one of the plans, INCOG executive director Rich Brierre, making the presentation, could not answer.

Board member Barbara Perez would quickly point out that information was not in the report and complained that the citizen survey and other materials were also unavailable in Spanish. Croisant also noted the citizen survey was initially issued without the proposed district boundary maps included. Consequently, the Board tabled the various redistricting proposals on Nov. 7.

In the interim, four more sets of maps were issued, adding to the confusion and dismay of the public. In that mapping process Booker T. Washington High School, George Washington Carver Middle School and John Burroughs Elementary School – all in the heart of the North Tulsa community – moved in and out of various school districts without explanation. It became increasingly clear to North Tulsans that whatever the redistricting guidelines were, they did not include keeping schools in their traditional and historic school districts.

Consequently, the board ad hoc committee overseeing the process met two days before the hastily scheduled special board meeting on Nov. 16, when a redistricting decision was made. In this ad hoc committee meeting, members of the public, including North Tulsans, were, for the first time, permitted to interact directly and informally with board members in a public forum. They expressed frustration with the process and clarified their goal of keeping as many schools as possible in their existing districts.

North Tulsans overcame complexity, a lack of critical information, and an overwhelming amount of useless information and plans that could have derailed their victory. But they faced other barriers as well. Among them was a delay in receiving redistricting information and an effort to hasten the decision-making process. The board authorized the INCOG agreement on Feb. 28. At that meeting, Gist told the board that the INCOG would take a “couple of months process in which the analysis will occur.”

Still, the deliberation and decision process would last “six months or more” using an ad hoc committee. As a result, it would not be until Sept. 6 before INCOG shared its analysis with the entire board and the public. It was only at that point that the people could have something concrete to react to, albeit however confusing and complex.

And while the Oklahoma law gives the board up until Dec. 31 to make a redistricting decision, Woolley and the board’s ad hoc committee chair announced the decision needed to be made by Nov. 18, because of an upcoming District 1 election. When quizzed about the late presentation of the map alternatives to the public, Woolley, in an interview with the Eagle, said the ad hoc committee had waited to see what INCOG “came up with” in the way of alternatives.

INCOG also attributed some delays in providing a report to the fact that school districts are last in line – behind the state, county, and judicial officials – to know what new precinct boundaries would be in the redistricting process. But Tulsa County Election Board officials told the Eagle that all precinct boundaries were fixed by April this year. Casey Reynolds, the county Election Board secretary’s supervisor, added, “In reality, we have nothing to do with the schools redistricting other than input the data when the process is completed.”

Thus, the public input process that could have allowed for many months to review the INCOG analysis, consider alternatives, and provide recommendations was condensed into a two-month window.

While the TPS board must consider redistricting following each census, INCOG’s Brierre told board members at their Sept. 6 meeting that the existing population deviation between districts, based on the 2020 census, did not necessitate school district boundary changes. But he said when new precincts were reconfigured in the redistricting process, the existing internal school district boundaries crossed through 11 precincts. Brierre referred to these as split precincts. He added when these precincts moved into adjacent current districts, it created a population imbalance among districts beyond that allowed under the law. Thus, redistricting must occur, boundaries must be changed, and some schools must be moved to a different district.

But as Woolley told the Eagle, “No law” requires district map contour lines to conform to precinct boundaries. And INCOG’s Brierre told the school board it was only desirable to do so “to help the election board” and “avoid potential voter confusion.”

County Election Board officials told the Eagle “split precincts” were not uncommon between different school districts and sometimes within them citing Jenks and Bixby school districts as examples. While it is true, TPS has historically avoided that as much as possible, the board could have accepted the existing district boundaries, and no schools would have moved to a different district.

In the end, INCOG produced a map that moved only six schools around and none out of districts No. 2 and No. 3 representing North Tulsa.

Still, neither that map nor the others under consideration answered the concerns of a majority of board members.

‘Tis The Season To Get… Boosted?

Tulsa’s Rejection of Dignity, After Death

Why Aren’t Flagship Universities Enrolling More Of Their...

Week Of Events Scheduled To Mark Six Years Since Terence...

Yes, This Ex-NBA Pro, Writer and Social Activist Has A...