White privilege and White supremacy clenched their fists and ran amok at the U.S Capital last Wednesday and 5 people died.  Smashing windows, breaking doors, defecating, urinating in the building, threatening to hang Vice President Mike Pence and hunting for Nancy Pelosi and others as they were confirming the results of the presidential election.  While […] 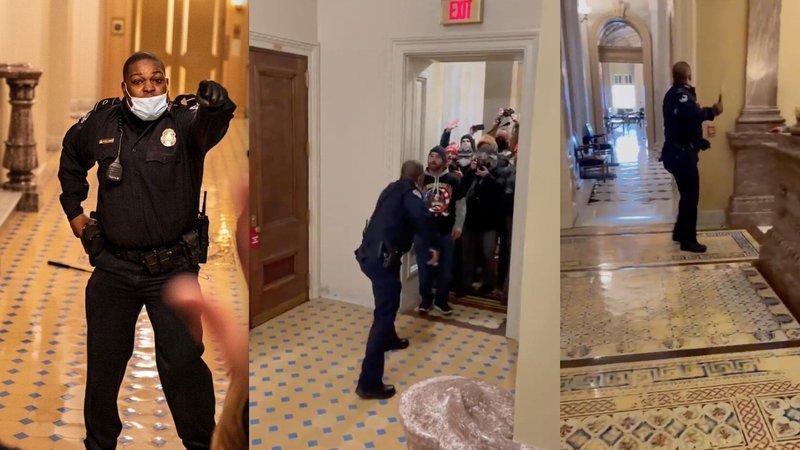 White privilege and White supremacy clenched their fists and ran amok at the U.S Capital last Wednesday and 5 people died.  Smashing windows, breaking doors, defecating, urinating in the building, threatening to hang Vice President Mike Pence and hunting for Nancy Pelosi and others as they were confirming the results of the presidential election.

While lawmakers were still in the Senate chamber, Army vet and Capitol Hill officer Eugene Goodman is seen looking at the unguarded doors leading to the lawmakers and then redirecting the angry mob in the opposite direction.  A petition is now calling for the officer to receive a Congressional Medal of Honor, the highest military honor, for his bravery during the Capitol attack by domestic terrorists.  He was only armed with a baton, quick thinking, and courage.

Everyone from teenagers on the street to President-elect Joe Biden has recognized that law enforcement reaction to Black or Brown people participating in insurrectionist behavior would have been very much different.  It raises the question: If that had been thousands of Black people breaking into the Capitol, carrying zip ties to hold hostages and threatening the lives of the lawmakers, how many body bags would have been needed at the end of the day?

Representative James Clyburn and other believes this “was an inside job.”  He said the rioters found the unmarked office where he works, not the one with his name on the door, yet the mob knew where to go.  TMZ reported that “the FBI is especially suspicious of the way rioters zeroed in on Speaker Nancy Pelosi‘s office. It’s virtually impossible to find in the maze, yet the rioters were inside her office within 11 minutes.

In 1977, President Jimmy Carter, granted unconditional pardons to hundreds of thousands of men who had evaded the draft during the Vietnam War by fleeing the country or by failing to register with their Selective Service Boards.  News reports are that Trump was “delighted” watching his supporters fighting on his behalf. Therefore, do not be surprised if, in his last slap in the face of the country that rejected him and as a final act of depravity, he issues a blanket pardon for the insurrectionists.  Anything is possible with that man, although it would probably guarantee a conviction in a Senate trial.

The good news is that Donald Trump has been impeached a second time and will be out of office no later than January 20th, and the nation can begin cleaning up the wreckage he has left behind and we won’t have him occupying so much space in our heads.

But first, we must get through the next several days of his seething anger, the promised violence in State Capitals and finally the Inauguration of President Joe Biden and Vice President Kamala Harris.

Then we will have to confront the 74 million who voted for Trump and pursue accountability for those who encouraged and those who conducted this American insurrection.

Dr. Lester Young Jr. has been named Chancellor of the New York State Board of Regents and is the first African American in that position.  This is great news for students, parents and educators across the State.  We’ve witnessed Mr. Young and his educator wife Renee, not only talking the talk, but walking the walk by devising programs and voluntarily working one-on-one, week after week, with students at the Boys and Girls High School campus for a number of years.   These are folks working not to get paid, but who are dedicated to uplifting all communities.

Lady Gaga: White People ‘Have a Responsibility to Unlearn’ Racism and White Privilege

Turn Your Desk Into A Charging Station

Mother Goes Labor While In Hotel Restroom: ‘I Grabbed Him...