At a young age, she would submit poems inspired by scriptures and stories from her grandmother to the youth magazine Wee Wisdom. 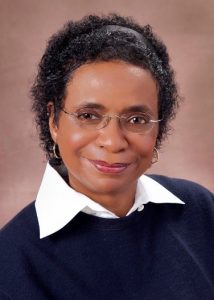 That fire translated into a career that “took off” in 1997 after Tsuruta returned to one of her alma maters, San Francisco State University (SFSU), to teach.

Describing herself as an “activist professor,” her teaching style focuses on student-centered pedagogy.

“I enjoy working with the students of all backgrounds,” says Tsuruta, a professor in the Africana studies department at SFSU. “Africana studies gives me a chance to focus on the kind of literature throughout the African diaspora that enhances students’ pride of being Black.”

Her research also centers around womanism.

“I look at the history of the word ‘womanist,’ which came from the early days of Blacks in this country …,” says Tsuruta. “I believe in culturally derived womanism for Black women. So that is a strong area, I have written a lot on Black women.”

She “hopes” that people see “Black pride and Black determination” through her work.

“It is wonderful to have been born Black,” says Tsuruta. “It is just great. That is what my teaching is all about, as well as being here for my students from all backgrounds.”

Outside of teaching, Tsuruta also served as the department chair of Africana Studies for 12 years at SFSU. Her role was to be an advocate for the department and serve as a resource for students to discuss general concerns, family matters and other issues.

“With an appropriate balance on my part, to be able to be someone that [students] could find faith in speaking to” she says. “We engage each other with integrity and mutual support. I have enjoyed students coming to the office, wanting to hang out.”

Tsuruta’s strong relationships with students also translated into the classroom. She is often stopped on campus by students hoping to converse. Some have even invited her to their weddings.

“I enjoy it,” says Tsuruta. “I love the students and I feel loved and embraced by the students. That is such a nice way to live your life.”

She has continued with poetry as well.

Tsuruta frequently judges at the annual College Language Association poetry contest and her poems have been featured in magazines such as The Black Scholar.

“Sometimes I tease my students and I say, ‘If you don’t have a date for the weekend, just read some poetry and get some chocolate candy,’” she says. “It is a glorious way to spend the evening or weekend. I just love poetry.”

Tsuruta was recently elected to be a delegate for the Modern Language Association and serves on the board of directors for the National Council for Black Studies.

“We all want to have professional organizations,” she says. “It means a lot to your career as well as to your personal growth goals. I feel I have been blessed with a career I did not anticipate.”

Tsuruta credits the support of her family.

“I was blessed in that my husband is as proud of me as were my parents when they were alive,” she says. “And that is nice because some academic women don’t necessarily find a partner who is totally excited about their careers and busy with their own career.”

Both Tsuruta and her husband, who is Japanese, “are focused on [their] particular cultures.”

“The kids always joke that if ‘Mom puts something Africana on her side of the mantelpiece or on the wall, Dad is going to balance it with something Japanese,’” she says. “I have African paintings on my side and he has Japanese paintings on his side. It has worked well for us.”

Going forward into the new year, Tsuruta set a goal to work more on her poetry. She plans to focus on one creative piece for at least three hours before transitioning into academic writing.

“The writing is just really different but you are being creative in both, of course,” says Tsuruta. “The way you present your thesis in a scholarly article. I just really love words and language as well as inspiring students to love it.”

This article originally appeared in the February 18, 2021 edition of Diverse. Read it here.