The Second Annual African American Golf Expo & Forum brought hundreds of Black golfers, entrepreneurs, and fans to Charlotte, NC. It served as a powerful and uplifting reminder of how much Black talent and ingenuity there is in the contemporary golf world in America. The post The African American Golf Expo & Forum:  Networking and Entrepreneurship appeared first on The Oklahoma Eagle. 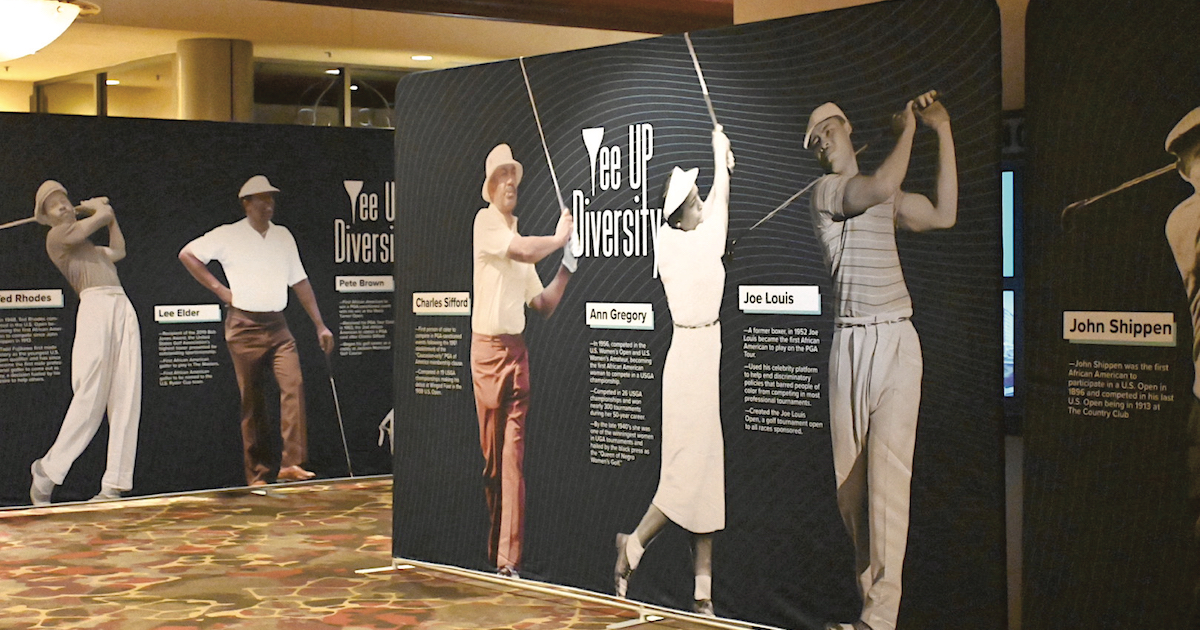 The Second Annual African American Golf Expo & Forum brought hundreds of Black golfers, entrepreneurs, and fans to Charlotte, NC. It served as a powerful and uplifting reminder of how much Black talent and ingenuity there is in the contemporary golf world in America.

The Expo, held over five days at the end of August at Charlotte’s Concord Embassy Suites Convention Center., featured golf game fans from across the U.S., 55 exhibitors, and forum discussions on various topics in the golf industry.

Jim Beatty, President of Jim Beatty Golf Ventures, founded and organized the event. Beatty is Executive Editor of the African American Golf Magazine. An economic development expert based in Omaha, Nebraska, he has been involved in golf as a board member of golf programs, including the formation of the First Tee in Omaha.  He has also been a board member of the Omaha Nike Tour, now known as the Korn Ferry Tour.  The Expo is based on the principles that “We Play, We Pay, and We Count.”

“It struck me that we all want the game of golf to grow,” Beatty said in an interview when he started the Expo in 2021. “I thought it was time we had a forum that brought together the best of golf but on a level that addresses African Americans. There are some aspects of the game that are germane that you need to hear about from our standpoint.”

Greenwood Golf is one of the businesses that offered a booth at the Expo. Founded in 2021 by Black entrepreneur Chris Word, the company – which makes its brand of golf ball – is already making an impact in the golf industry.

The company’s name is a tribute to Tulsa’s Black Wall Street and highlights the inspiration of the Tulsa Black community.  Word has been around the game of golf since being a member of a Tiger Woods golf summer camp in East Saint Louis, Illinois.  He was inspired to develop a golf ball company because he noticed that the game of golf that we watch professionals play – with booming 300-yard drives and towering approach shots that spin backward 10 feet to the pin — is not the game he plays with his regular group.  After extensive outreach and research, Greenwood Golf has introduced a ball that has features to keep a ball in the fairway. Most importantly, when a player hits critical short-pitch shots to save par, the ball stops on the greens.

The African American Golf Expo & Forum is modeled after the annual PGA Expo. That event sets the stage for the rich innovation and products that shape the game of golf. During the African American Expo, it became clear that there are African American-owned entrepreneurs who are bringing their novel concepts to the golf game.

A showcase for golf entrepreneurs

Besides Greenwood Golf, this reporter met and visited 25 different business owners who are bringing new products to the golf arena. Many are transforming the golf industry and bringing more diversity to the global golf business enterprise.

Another prominent feature of the event was the forums.  Attendees had the opportunity to hear an overview from the Tiger Woods foundation, how to build a multimillion-dollar golf-based non-profit organization from Midnight Golf, Diversity initiatives from course management company Troon Golf and industry benchmark Acushnet/Titleist, along with grassroots programs that are impacting the lives of underrepresented communities from speakers like Craig Kirby who created the “Golf My Future, My Game” in Washington, DC.

Beatty also ensured the African American Golf Expo & Forum engaged with the Charlotte community by hosting a junior golf clinic at the Dr. Charles L. Sifford Golf Course.  Sifford was a native of Charlotte and became the first African American to play on the PGA Tour.  The golf facility has numerous markers throughout the course that tells the story and historical significance of Charles Sifford’s life and career.  Expo attendees also had the opportunity to compete at the golf tournament hosted by Rocky River Golf Course.

The experience inside the Concord Convention Center for the Expo was uplifting as more than 500 were able to meet, review, experience, and BUY products, including apparel and equipment, while also getting the opportunity to visit firsthand with representatives from the PGA of America, GolfTec, Golf Pride Grips, The Golf Course Superintendents Association of America, and the USGA.  Each one of these exhibitors is a heavyweight in the golf industry, and their presence confirms that the 1.1 billion spent by African American golfers is relevant.  Adding to the experience was the in-house music provided by LK Productions.

African Americans have a long history in the game of golf. From John Shippen, the first PGA Professional, to the legendary Tiger Woods, the stories of the game’s impact on Black culture are critical, inspiring, and colorful.

Attendees at this year’s Expo heard stories from authors Ward Clayton who wrote ‘Men on the Bag: The Caddies of Augusta National’ and Pete McDaniel, the award-winning writer who penned ‘Uneven Lies.’  Hearing tales of Pappy Stokes, and the exploits of James Black by those who had the privilege to know these men were another highlight of the Expo.

Plans are underway for the third African American Golf Expo & Forum to be held in Louisville, KY, from August 25-30, 2023. The event is on its way to becoming a significant celebration of Black contributions to the marketplace and the game of golf.

Byron Perry, a freelance writer for the Oklahoma Eagle, is a native Tulsan, a husband, a father to four and since the earliest he can remember sports has been a part of his life teaching some of the best lessons life has to offer.  Byron’s best moments today come from time with his family and some truly great friends. And yes, Byron is always working to beat ‘Old Man Par’.

This Land is Herland tells the stories of women who shaped...

North Tulsa Cemetery Finally Being Cleaned Up After Months...

Are Churches the Key to Ending the Black Overdose Crisis?