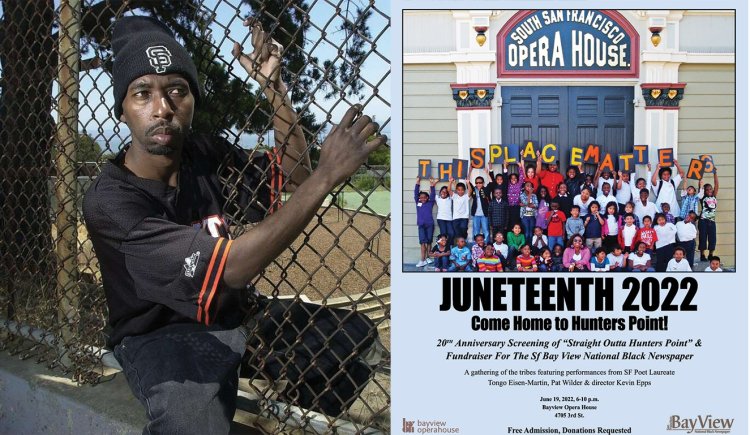 “I’ve shown this film all over the country, but nothing beats bringing it home to Hunters Point,” said filmmaker Kevin Epps, HP born and raised, about the game-changing film released 20 years ago, in 2002, to rave reviews in Hunters Point and far beyond.

An unflinching examination of life in the hood from all sides, “Straight Outta Hunters Point” is raw, using footage of real people and real events. Were you here then? Do you remember the elegance of the funerals – and the unbearable pain of poverty? Living in a war zone yet feeling the love of family. Cops in the hood and the fight in City Hall. The shame and the fear and the glory of Hunters Point, the fiercest hood in the Bay.

Don’t live in Hunters Point any more? Come from wherever you are for a Hunters Point Reunion on Juneteenth – Sunday, June 19, 2022, 6-10 p.m., at the Bayview Opera House, 4705 Third St., San Francisco, for a Gathering of the Tribes.

Music by Pat Wilder opens the show. San Francisco Poet Laureate Tongo Eisen-Martin will perform and inspire. Filmmaker Kevin Epps, pride of Hunters Point, will wrap up with a discussion. Come with questions, answers and your ideas about why things are and how they ought to be.

EXPLAINER: How do we know when a recession has begun?