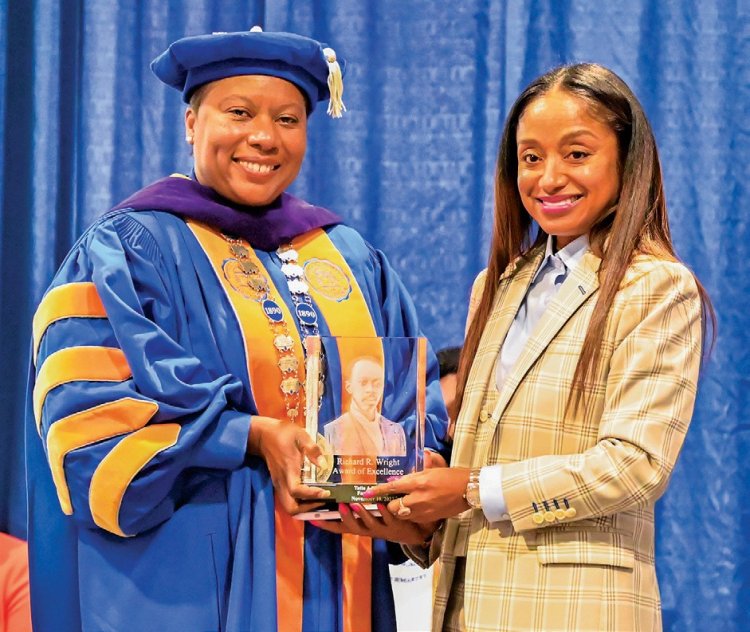 Presented to alumna Tatia Adams Fox, Class of ’03, and named for the first president of SSU, The Richard R. Wright award is the highest honor that can be bestowed upon alumni, recognizing outstanding leaders who have distinguished themselves through their expertise in social, educational and civic arenas.

A Savannah native, Fox earned dual bachelor degrees in business administration and mass communications from SSU. She also earned a master’s degree in integrated marketing from Roosevelt University. She recently joined American Express with over 25 years of experience in marketing, project management, client partnerships and entertainment. She is a member of the National Association of Black Female Executives in Music & Entertainment, National

Retired Marine Corps Veteran Lt. Gen. Gaskin is Secretary for the North Carolina Department of Military & Veterans Affairs. He served as the Commanding General of the 2d Marine Division at Camp Lejeune, N.C., and is the first Black American to command a marine division. He was the 19th deputy chairman of the North Atlantic Treaty Organization (NATO) Military Committee and was the acting chairman of the NATO Military Committee from November 2011 to January 2012, making him only the second American to ever hold the position.

A graduate of Savannah State University’s NROTC scholarship program, Lt. Gen. Gaskin earned a Bachelor of Science degree in history. He also earned a master’s degree in public administration from the University of Oklahoma, summa cum laude, and com- pleted the senior executive seminar from the John F. Kennedy School of Government at Harvard University. A previous recipient of The Richard R. Wright Award of Excellence (2008), he is a dedicated supporter of SSU. He serves as a director for the SSU Foundation Board and most recently secured three generous gifts to support SSU students through his work as a committee member for the SSU Foundation’s homecoming Scholarship Golf Scramble.

The annual Founders’ Day event is a ceremony held to commemorate the founding of Savannah State University as an institution of higher learning and to recognize those who have contributed to its success.

Vote in My Honor: Rally, Community Resource Fair and March

Bethesda Academy Announces Four New Members As Board of...