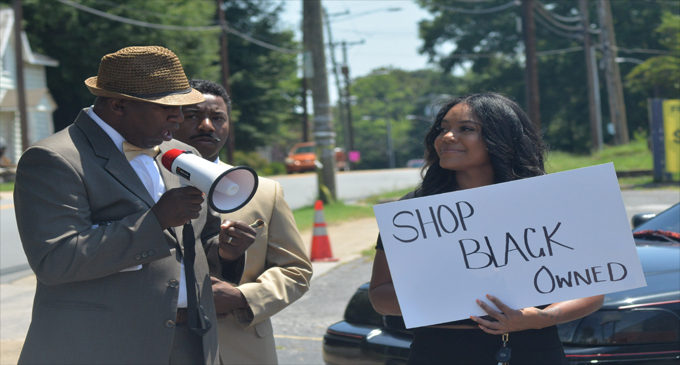 While addressing the crowd of protestors outside Ego Beauty Supply on Waughtown Street last Saturday, Effrainguan Muhammad, a student minister with the local Nation of Islam, didn’t mix words when delivering his message to the owners of the establishment.

“Our message is short and simple. Keep your God damned hands off our Black women,” Muhammad said. The protest, which was organized by Hate Out of Winston, was held in response to videos posted on social media that show the store’s owner and a female employee getting into a physical altercation with a Black customer.

Here’s what we know about the incident: On July 16, at around 10:30 a.m., Terrica Hughes, a professional stylist who has a salon in Clemmons, approached the counter to make a purchase, but when she tried to pay, the transaction couldn’t be completed according to the employee working the register.

Hughes waited for the error to be corrected and says she used her banking app to show the owner, Hasan Kanan, that the transaction for $31.17 had cleared. But that wasn’t enough for Kanan. Instead, Hughes said she was accused of stealing and Kanan even tried to make her pay again.

Hughes said after waiting about 30 minutes, she tried to grab the items and walk out the store. The video clip posted on social media begins a few seconds before Hughes tried to leave the store. The clip shows Kanan grabbing Hughes and pushing her back to the counter. A female employee also grabs Hughes in the video and takes her bag.

After Hughes’ video reached more than 100 shares on social media and the “#weareterrica” hashtag started to spread, Ego Beauty Supply released a statement on Facebook. In the statement which included somewhat of a backhanded apology and has since been deleted, they said Hughes’ video didn’t tell the whole story.

The statement read, “The story that came out isn’t the whole truth, did not show everything and did not explain that other side of the situation.”

A few days later Ego Beauty Supply released a second statement which was deemed to be the store’s “Official Statement.”

Darlene Steele, a member of Hate Out of Winston, said she was outraged when she saw the video. She said the protest and the boycott of all Ego stores is about protecting “… Black women, Black economics, and respecting the Black community.” In addition to the store on Waughtown, there are two other Ego Beauty Supply stores in Winston-Salem.

“I was outraged and hurt that the owner dared to put his hands on her physically,” Steele said. “Black women have endured enough over the years. We are tired. Enough is Enough. We are Done!”

In addition to the boycott of all Ego Beauty Supply stores, Hate of Winston is also demanding: employees not pursue any charges against Hughes, an apology to Hughes and the Black community, donate 5% of the total annual sales to a reputable Black-led organization for a period of three years, immediately enact a policy that unequivocally states that they do not escalate nor physically assault or place their hands on any Ego customer, and a one-time donation to Hughes’ business as a gesture of goodwill and to validate the sincerity of the apology.

Miranda Jones, founder of Hate Out of Winston, said while discussing the incident with Hasan Mohammad, Kanan’s son, over the phone for nearly an hour on July 21, he never said Hughes’ card was declined or that she stole from the store, but he did admit several times that his father made a mistake.

“This narrative about Terrica doing something wrong is false,” said Jones while addressing the crowd through a bullhorn during the protest.

Jones said the boycott is just phase one of the protest. They are looking to partner with locally Black-owned businesses to provide hair care products. Hate Out of Winston has already forged a partnership with House of J. Lorraine, a Black-owned beauty supply store located in Salisbury, and Other Suns, which is located at 414 N. Laura Wall Blvd.

Representatives from Ego Beauty Supply declined to comment about the incident when asked on Saturday following the protest and earlier this week when contacted by phone.

According to a report published by Black Enterprise, Black shoppers spend $473 million on hair care every year, which is nine times more than white shoppers. Yet they own less than one percent of the market share.

“This issue is bigger than me, we are pressing an issue that is very prevalent in the Black community,” Hughes continued. “This business is a billion dollar industry and we are fueling this business and supporting these businesses and keeping their pockets heavy.”

Hate Out of Winston has announced they will hold another protest at Ego Beauty Supply Saturday, Aug. 6, at noon.

The US Government’s Call for Deep Nicotine Reduction in Cigarettes Could Save Millions...

The NBSM: Our Marathon Continues A GDN Exclusive

The Forward Times in Houston: Carrying Forth a Special...