Police released the 911 call and body camera footage from the incident that left Herman Whitfield III dead after an apparent mental health crisis April 25. The footage shows officers entering the home in the 3700 block of Marrison Place and attempting to talk to Whitfield, who didn’t appear to understand officers’ questions or directives. […] The post Police release body cam footage of Herman Whitfield III’s in-custody death appeared first on Indianapolis Recorder. 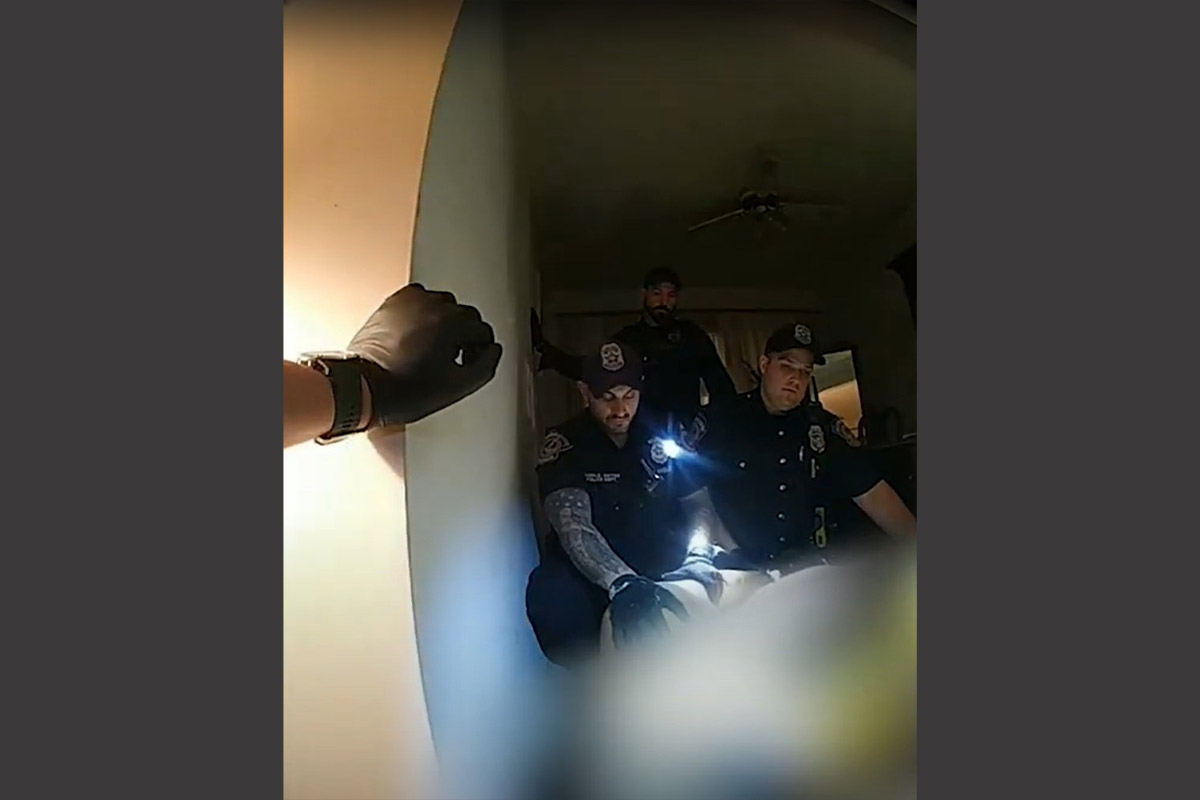 The footage shows officers entering the home in the 3700 block of Marrison Place and attempting to talk to Whitfield, who didn’t appear to understand officers’ questions or directives. He then ran from a bedroom to the kitchen, where dishes can be heard crashing, and then into the dining room, where an officer tased Whitfield.

Whitfield was unresponsive when medics arrived. He was transported to a hospital where he was pronounced dead.

Officers responded to the call at about 3:20 a.m. after Whitfield’s mother, Gladys Whitfield, called 911 and said her son was having “some sort of episode.”

The dispatcher asked what kind of episode it was.

The dispatcher also asked if drugs were involved.

“No, he doesn’t do drugs,” she said. “And he’s never been diagnosed with anything. This just started a while ago.”

The video starts with officers at the door. According to police, officers saw Whitfield “naked and sweating” in a hallway, and he was “bleeding from the mouth.” Most of Whitfield’s body is blurred in the video.

The video shows one officer attempting to talk to Whitfield as he came in and out of view in a doorway down the hall from the front door, but he doesn’t appear to understand why officers wanted to talk to him.

Officers talked with Whitfield for more than 10 minutes, according to IMPD. At one point, he was sitting on a bed, still naked, as his parents tried to get him into clothes.

Whitfield then ran out of the bedroom and into the kitchen, where dishes can be heard crashing. The video is too dark to tell what exactly is happening, but one officer tells Whitfield to stop picking things up.

Next, he ran from the kitchen to the dining room, where another officer had his Taser out. He appeared to be running toward the officer, who tased Whitfield.

After a Taser trigger is pulled, it automatically activates for five seconds, according to police. The incident video said a review found the stun gun was activated again about four seconds after the first round ended.

Whitfield fell when he was tased, and officers put him in two pairs of handcuffs, citing his size. Whitfield can be heard yelling inaudibly as he was handcuffed face down with officers on top of him and at least one holding his head.

The incident video IMPD produced says once he was handcuffed an officer “immediately requests medics to come inside the residence.”

“Come on, Herman,” one officer said as they rolled him onto his side, but Whitfield was unresponsive.

Medics checked for a pulse, attempted CPR and said to take the handcuffs off of him. Officers assisted medics by performing chest compressions, IMPD said.

Whitfield’s family released a response to IMPD’s critical incident video through their attorneys.

The family said the video IMPD released is “selective and biased” because it includes narration and text to create a “false narrative” of what happened. The family said, as an example, Whitfield was only holding a plastic water pitcher, which he “tossed” into the air when an officer told him to drop it.

The family also said Whitfield didn’t rush at officers but was instead “moving from room to room.”

“Mr. Whitfield did not present a danger to the officers, and there was no need to taser him,” the family said in its statement.

Why did it take 2 months to get body camera footage?

IMPD Chief Randal Taylor said he would have rather released the footage after Whitfield’s autopsy report was available.

“But the community was asking for the video,” he said, “so that’s why we decided to put it out now.”

Taylor reiterated his stance that he doesn’t want IMPD officers responding to mental health calls. The problem, he said, is there isn’t a group ready to “step into that space.”

The city has a unit — the Mobile Crisis Assistance Team, or MCAT — that responds to mental health calls, but the team only operates 7:30 a.m.-6 p.m. Monday through Friday. IMPD Lt. Shane Foley noted the call that came in for Whitfield was a disturbance call, so MCAT wouldn’t have been dispatched, but that doesn’t mean the unit wouldn’t have eventually become involved.

Taylor said the department has been trying to expand MCAT’s coverage.

“The problem is finding the clinicians that are willing to work those extended hours,” he said.

The city and IMPD have also been involved with Faith in Indiana to pilot a clinician-led crisis response team that doesn’t include officers.

‘They let us down drastically’

Whitfield’s family filed a wrongful death lawsuit against the city and police officers involved in his death, alleging they used excessive force against Whitfield.

“This was a call for Herman during this mental crisis and he wound up dead because of first responders, who are the people you depend on in these situations, and they let us down drastically,” his father, Herman Whitfield Jr., said at a press conference June 22 at Cruz Law Firm, which is representing the family.

The six officers named in the lawsuit are Steven Sanchez, who deployed the stun gun, Adam Ahmad, Matthew Virt, Dominique Clark, Jordan Bull and Nicholas Matthew. All officers were previously identified by IMPD and have been on administrative leave during the investigation.

The lawsuit was filed June 22 in the U.S. District Court Southern District of Indiana.

“He shouldn’t have died,” one of the attorneys, Richard Waples, said at the press conference. “They should have gotten him help, they tried to get him help. They were in their own home and instead officers killed their son.”

The civilian-majority Use of Force Review Board will review the incident once the criminal investigation concludes.

Review: George Clinton: From Indiana Avenue to the Mothership, the best of Parliament-Funkadelic...