Wrestling is not typically a sport that many women gravitate toward. For Rhoda Asare, who is not your average young lady, wrestling was just the new challenge she was looking for after a discussion with a classmate. The post Parkland’s female wrestler hopes to turn heads this season appeared first on WS Chronicle. 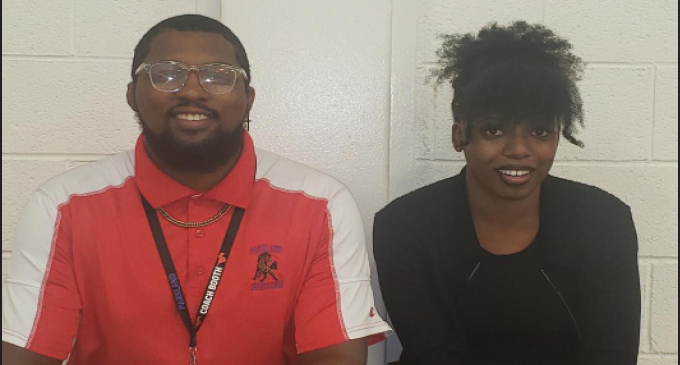 Wrestling is not typically a sport that many women gravitate toward. For Rhoda Asare, who is not your average young lady, wrestling was just the new challenge she was looking for after a discussion with a classmate.

Asare is the only female on the Parkland Mustang wrestling team and will face men and women wrestlers throughout the season.

This is her first season on the wrestling team and it is an interesting story as to how she came to be on the team.

“One of our wrestlers, who is in the same English class, said he would beat me in a wrestling match and I was like ‘No, you can’t’ and he told me his coach was starting a female wrestling team, so if I joined, then we would know who would win in a fight,” Asare said smiling.

“So, I was walking down the hall and I saw the poster for the girls wrestling team and I was like ‘Oh my God, there it is, now I got to sign up.’  I signed up and I actually love it.”

Asare says she grew up around a lot of boys in her family, so she was used to wrestling around with the guys, so to speak. She is used to being “roughed up” by her male family members, so she wasn’t really worried about the physicality of being on the wrestling team, but still had some nervousness, nonetheless.

Wrestling season started at the beginning of this month and Asare had her first match this past Tuesday (a day after our interview). Asare has put in the time to be as prepared as possible for her first match.

“I don’t really think about that personally, but sometimes I hear my coach saying stuff and I have been through a lot in my life, so I am not really the type to complain,” she said about her being worried or nervous about her first match. “I just know that if I want something, all I have to do is go get it. For me, it’s mental preparation, not a lot of physical.

“I am pretty scared, because I have never done this before,” she said about her first match. “I have never seen these people before. With my teammates, I kind of know their strengths and stuff like that, but I don’t know those other people, so I am kind of scared. I feel like I am going to be in the middle with everyone watching me, but it’s going to be OK.”

When Asare brought up the idea of wrestling to her family, there were some mixed feelings from them. Her mother was nervous for her; however, her father was on board from the start.

“I told my mom first and she was like ‘Do you want to die, do you want to kill yourself?’” she said. “She was like ‘Don’t you want to dance or something?’ and I was like ‘Nah, I want to wrestle.’ My dad, he was like, ‘You could do it, so just do it’ and I would wrestle my dad in the kitchen, and he was really supportive of that.”

Originally from Ghana, Asare played soccer for years and has also been a dancer for the Parkland dance team as well. She says she just wants to try something new with wrestling and hopefully can inspire other young ladies to try it in the future.

When it comes to wrestling, Asare says she loves the physical battle of being in a match with another person. Just being able to test your strength and will against another person is what attracts her the most. She says she likes wrestling guys and girls, but knows that the guys will give her more of a physical test.

Elijah Booth is the assistant coach for the Mustang wrestling team. He says when he first saw Asare, he could see she was raw, but felt she could be developed because she is one of the hardest workers on the team. According to Booth, her drive and effort was one of the main reasons she was named a team captain this season.

Asare is able to pick up the tools of the trade very quickly, said Booth. He says he can give her instruction on a move or technique and it doesn’t take long for her to catch on.

“When Rhoda first came in, first thing I teach is double legs, I teach shots. Rhoda came in and was already doing it with ease,” said Booth. “I expected that because she is a female and they generally have better hips than men.

“Every challenge I’ve thrown at her, she picks it up and she goes with it. It was nothing I could ever say that I was like ‘No Rhoda, not like that.’ She listens and I think it’s her seniority. She knows how to listen, and she knows how to use her body, so it makes my job a lot easier.”

Booth stated that Rhoda has acclimated herself very well with the guys on the team, even though she is the only girl. She continues to foster good relationships with other team members.

Asare will wrestle in the 145-weight class. Booth says he expects her to perform well throughout the season. He says Asare could be a conference wrestler and place at the women’s state championship meet as there are separate brackets for boys and girls on that level.

So You Want to Vote by Mail – 5 Essential Reads