Tanisha Bowman joined the New Moms Coffee online space just as her daughter was born at the start of the pandemic. She immediately noticed the racial tension. (Photo by Ryan Loew/PublicSource) by Leah Walker and Meg St-Esprit, PublicSource Leah: Being a mom can be very challenging. Balancing work, homeschooling, running a house and the never-ending task … Continued The post Navigating the tension-filled world of motherhood in Pittsburgh’s Facebook groups appeared first on New Pittsburgh Courier. 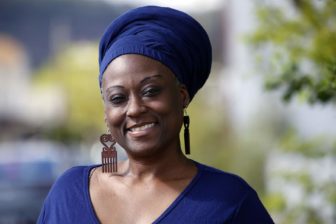 Tanisha Bowman joined the New Moms Coffee online space just as her daughter was born at the start of the pandemic. She immediately noticed the racial tension. (Photo by Ryan Loew/PublicSource)

Leah: Being a mom can be very challenging. Balancing work, homeschooling, running a house and the never-ending task of house training our dog definitely gets the best of me at times. So naturally, after a long day of meltdowns, cleaning up dog poop, answering the same questions over and over all day long, I enjoy a mindless social media scroll at night in my free time. On Facebook, I often seek out mom groups I feel could be a great support for whatever life tragedy may have happened during the day. Child got his head stuck in the monkey bars at the park? There’s a mom group for that! Mall meltdown earlier in the day still got you feeling like crap? There’s a mom group for that!

Many times, these mom groups are like a breath of fresh air. The support, advice and the resources are usually just what I need. After joining a new group and observing for a bit, I usually feel like: “Ahhh!! I have found my people!”

Leah Walker is a homeschooling mother of four school-aged children and an adult child. She is a speaker and educator living in Westmoreland County. (Ryan Loew/PublicSource)

Then, it happens. The judgment, the mom shaming, the entitlement, privilege and… dare I say it? The racism. Yes, it is true, in moms groups centered around disabilities, recipe ideas and even arts and crafts, it happens. Sometimes it’s passive aggressive. “Oh, we prefer to shop in the suburbs.” Or the, “I would never send my child to a city public school because the kids there are so rough.”

Other times it’s straight in your face. All city neighborhoods are ghetto and filled with drug addicts and thugs. I’ve experienced both types. Initially, I was blown away. I would just clutch my invisible pearls and keep scrolling. Eventually, holding my tongue was no longer an option. Against my better judgment I began to engage. Most of the time, I left the conversations frustrated and baffled. It perplexed me that, as a woman of color, my truth and experiences were often dismissed. I remember one time a white mom actually proceeded to tell me how Black people feel. Did she somehow have the inside track to Black feelings that I wasn’t aware of?

Meg: I remember as a new mom with my oldest, who is almost 10 now, I was added to a Facebook group that branched off of the in-person Storkbites meetups through Heritage Valley Sewickley. The Tribune-Review even covered the e-village, way back then. As the number of kids grew in our family, and our dynamics changed, more and more groups were added to my world. There is a Facebook group for everything. I am in so many that cover a wide variety of topics: things found hidden in walls, bearded dragons, adoption, refinishing floors, finding Aldi sales, writing, cloth diapering, you name it. Sometimes, those groups implode. Losing an online community can be heartbreaking, and I wrote about that once for Romper. Sometimes it happens for reasons out of our control. Sometimes, like the loss I described in that piece, I messed up, but lines are more easily drawn than in real life, and many parents feel the loss of online support systems viscerally.

When we moved to Bellevue in 2014, I did not know a soul. With another mom, we started a local Facebook group for the area that grew quickly to be a pretty active space. I began to start being invited to be an admin in other groups too. At one point, I was an admin for over 20 groups, which was overwhelming at times. Issues cropped up at all hours of the night, and I would often wake up to 20 or 30 angry messages about a problem I had missed. Often the issue was legitimate, and I felt terrible about my inability to address it.

As Leah and I talk about in this piece, racism and microaggressions are rampant in online spaces. Sometimes the issues were not legitimate. Ask yourself if sending 20 messages at 2 a.m. over sidewalk chalk art is necessary.

This spring, in the wake of dealing with the long-haul COVID-19 recovery process, I stepped down from my admin role in nearly all of the groups. I still remain a member, and while they are often still very useful, as an observer, I have become more aware of the harmful dynamics of the groups for marginalized and members who are Black, Indigenous, People of Color [BIPOC].