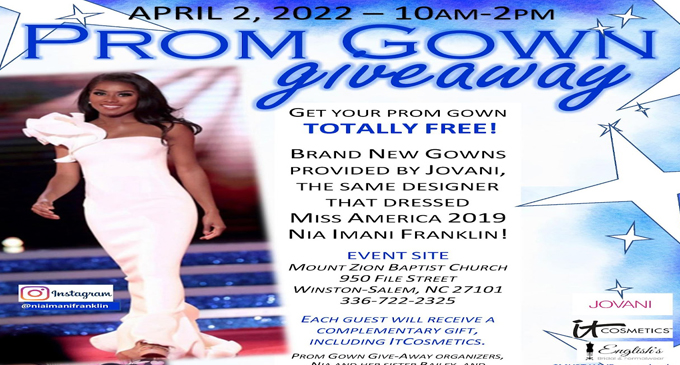 Are you wondering what Winston-Salem native Miss America 2019 has been up to lately? So have we.

Looking back to Sept. 9, 2019, in Atlantic City, New Jersey, Nia Imani Franklin won the coveted title of Miss America. Her mother, Kristy Franklin, is a teacher at Ward Elementary School. It was such an exciting time and still is to this day. Her mother often finds it hard to believe that her daughter holds this title.

Kristy Franklin said, “The other day – out of the blue – I asked my husband, ‘Can you believe our daughter is Miss America 2019?’”

Ironically, in early 2020, Nia landed a role in the Piedmont Opera’s production of “A King and I” as Tuptim. So, she was home preparing for the play. At about the same time, the coronavirus had infiltrated our country. Almost simultaneously, as Nia was learning her lines, working with a coach on speaking with an Asian dialect, and rehearsing the music, the shut downs began. She was hoping and praying it would not happen, but in March 2020, the pandemic closed most major auditoriums and opera halls. Her debut was canceled. Instead of Nia returning to Winston-Salem for her premiere, she returned home to hunker down with her parents.

“I was thrilled to be working with the Piedmont Opera. I was thankful they had given me my first paid acting role,” Nia said. “I had been onstage as a singer many times, but performing an acting role was a new experience for me. Unfortunately, the week before the production, the city closed just about everything, schools, malls, and yes, the Piedmont Opera’s presentation of ‘The King and I.’”

Nia was living and working in New York prior to her return home. She is a music composer, host, actress, and singer. Her ultimate goal is to write orchestra music for film. In the meantime, she is preparing for her first professional solo recital in San Francisco in May. Nia was the Composer in Residence last summer in Napa Valley in which the highlights were performing for the Tony Bennett Tribute Show, meeting Jennifer Hudson, and having her own orchestra music premiered. Nia is returning to Napa in July to premiere a new choral piece with the Young People’s Chorus of New York City.

Last year, she released her first EP featuring Chrysalis Extended, which has been played by three orchestras and will be performed April 13 at Indiana University’s Chamber Orchestra concert. Most recently it was played by the Saskatoon Symphony Orchestra in Canada.

Nia is flying in and out making a living as an artist, singer, and performer. Nia wrote and debuted her original song for Miss America’s 100th anniversary in December entitled “Hello, Miss America.” She made a cameo appearance in “Colin in Black and White,” along with her friend, the late Cheslie Kryst, Miss USA 2019. Cheslie’s death was devastating to Nia and her family.

“I am brokenhearted by the passing of Cheslie. We were in the middle of writing our book about our historic 2019 wins,” Nia said. Cheslie and Kalieghi Garris, Miss Teen USA 2019, and I made history by being the first African-American title holders in the major pageant systems in the same year – 2019. We are still mourning Cheslie. I miss her deeply.”

But the crown evidently follows Nia. She considers it an honor to receive another crown on North Carolina soil. On March 8, 2022, Nia was announced the 75th Queen Azalea. The coronation of the 2022 North Carolina Azalea Festival Queen Azalea coronation is April 6 at Live Oak Bank Pavilion in Wilmington.

“I am overjoyed to be chosen as Queen Azalea! I am in good company, too! Actress and Cosby Show icon Phylicia Rashad and the first African American Miss America and singer/actress Vanessa Williams were also Queen Azaleas. Wilmington is a beautiful coastal city. I visited as Miss America and loved every minute of it. I look forward to returning!”

There are many events associated with the Festival including the 75th North Carolina Azalea Festival Parade, which will take place Saturday, April 9, beginning at 9:30 a.m.

Now that Nia is back in North Carolina, she is resuming some of her favorite activities, which include eating Southern food and attending church with her family.

“We attend Mount Zion Baptist Church here in Winston. I grew up in this church. My first solo was in this church,” said Nia cheerfully. “I thank God constantly for my upbringing. It kept me grounded during my Miss America journey. It’s a tough job and my faith in Jesus got me through the busy, hectic days and the grueling schedule.”

Nia has decided to sponsor a prom dress giveaway at her church.

The prom gown giveaway idea all started when she told her mom she needed to get rid of a lot of items she had acquired on the road as Miss America. Nia traveled to many cities in the United States, Antigua, and she visited six countries while on a USO Tour including Germany, Kuwait, Spain, and Djibouti, Africa. Most of her attire was provided through the Miss America Organization.

Nia said, “I have about 15 to 20 personal gowns that I wore once or not at all, that I will donate to the drive. I have a story to tell about each dress I wore. Jovani is the designer of the gown I wore when I won Miss America. They have contributed 75 brand new, never worn gowns. They are gorgeous,” said Nia excitedly!

There may be other prom dress giveaways, but Jovani is one of the top-of-the-line dress designers. Additionally, local establishment English’s Bridal Shop in Clemmons contributed about 20 gowns to the effort. Donations have also been received from church members of new or gently used gowns.

“I went to high school with Nina,” said the owner of English’s. “She did not hesitate to support this event. In fact, she reached out to me after I posted information on my Instagram about the upcoming event.”

“It’s been hard on many families due to the pandemic,” said Nia thoughtfully. “This is my way of offering some support and hopefully a little happiness to the young ladies in my community. I hope it makes a difference for them.”

Nia’s sister Bailey is helping to coordinate the event. Bailey is a new mom and newly engaged. Organizing this event is very special to Bailey, and she considers the opportunity to serve the young ladies in Winston-Salem and surrounding areas as a service to God.

“God is so good! I am just so happy to be able to give back. The young ladies are going to look fabulous both inside and out,” Bailey said.

“I remember my prom,” Bailey reminisced. “It was the first time I wore a beautiful gown and got all made up. I felt so beautiful – like a lady. We want other young ladies to experience the prom. The dress is the main component and usually makes up the greater percentage of the prom budget for families.”

The Prom Gown Giveaway is Saturday, April 2, from 10 a.m.- 2 p.m. at Mount Zion Baptist Church in Winston-Salem at 950 File Street. There will be refreshments, door prizes, gift bags including lipsticks from It Cosmetics, and jewelry. Everything is free.

“Yes, I will be there,” Nia says with excitement. “I am praying now for each of the ladies who will come to the prom giveaway. I pray that they will take away much more than a gown, although these dresses are amazing! I hope they understand the love of Christ through this event. I hope they believe with all their hearts that they are unique and everything about them is just the way God designed.

“As Miss America, I always knew it was much more important to believe in myself and not my appearance or the beautiful clothes that I wore,” Nia continues. “It is not our adornments that make us beautiful – the hair, the face, lashes, and all the bling. It is the young woman in the dress who is the true treasure,” Nia emphasized.

The Forward Times in Houston: Carrying Forth a Special Vision

An Emphasis on Brilliance Creates a Toxic, Dog-eat-Dog...