Madison LT Nicolas Golden: the mountain of a man-child

Madison High School junior left tackle Nicolas Golden is a 6-foot-6, 280-pound man-child who blocks with bad intentions on the Marlins O-line. Whether it is clearing a hole with a pancake […] 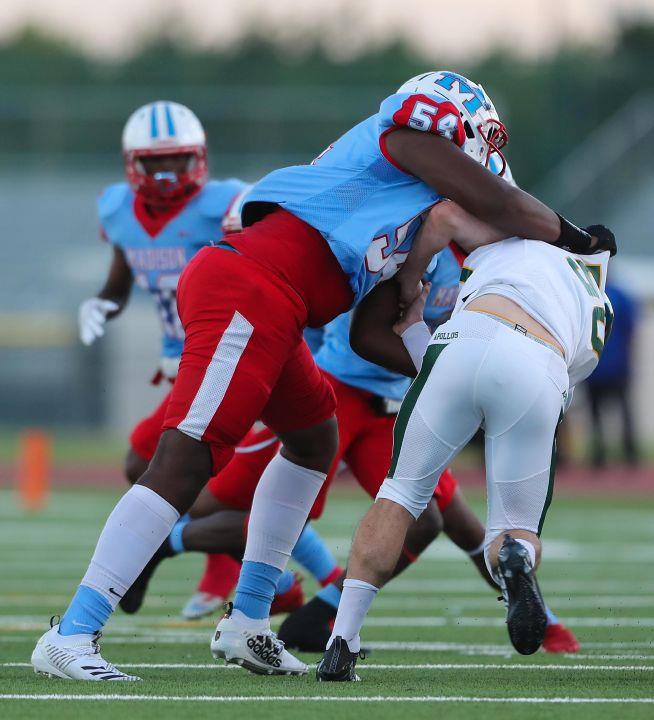 Whether it is clearing a hole with a pancake block or pulling off the edge, Golden leaves many opponents in terror knowing he could be coming with each and every snap.

In Madison’s 54-0 blowout victory over Sharpstown, Golden wreaked havoc on the Apollo’s defensive front all night.  It got to the point where Golden was blocking players all the way to the sideline with their coaching staff.

As a junior, Golden has raw talent, but with the proper training, workout schedule and guidance, he could easily end up as one of those surprise impact players coming out of H-Town when all is said and done.

The Defender spoke with Golden after the game against Sharpstown to discuss his style of play, keys to success and more.

“I like to be aggressive and go out there and do my thing with my teammates.”

“I just have that drive that I want to play.  I’ve got that fire in me.”

“I have been working on kick stepping, placing my hands and my stance.”

“We need everybody.  This win [vs. Sharpstown] was a group effort and we have to play for everybody as a key to success.”

Shout-outs: “All my coaches and my teammates.”

HBCU Students: Electrify Your Future with Chevrolet and...

As she prepares to leave Congress, Eddie Bernice Johnson...