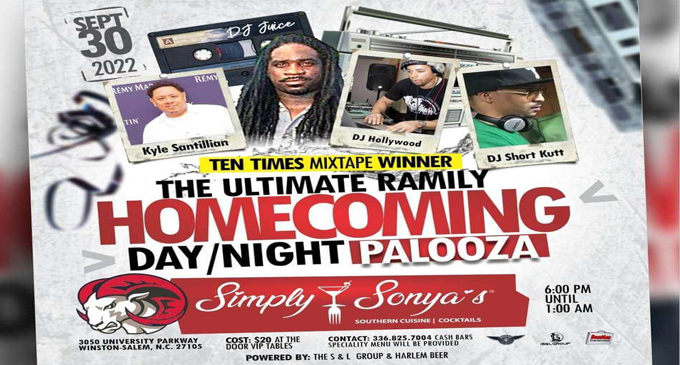 Homecoming season is approaching and many people will be flocking to Winston-Salem the week of Oct. 17. To help kick off the festivities, the S & L Group and Harlem Beer are throwing an event called The Ultimate Ramily Homecoming Day/Night Palooza on Sept. 30 at Simply Sonya’s from 6 p.m. to 1 a.m.

The S&L Group is run by Sylvester Reed Jr. and Lloyd Leonard Jr. who are Winston-Salem State University alumni. They have been throwing parties and events for many years and now that we don’t have many COVID-19 restrictions, they are ready to have fun like they did prior to the pandemic.

“We wanted to give it that old school alumni grassroot type feel because that’s based on what we did prior to the pandemic,” said Leonard.

“We wanted to do something a little different. We say it’s a party but we both wanted to have an experience, or an event that they can go home and talk about what our school represents,” said Reed.

The event will be hosted by Kyle Santillian, former 102 Jamz morning show host, and will feature several DJ’s such as DJ Short Kutt, DJ Hollywood and DJ Juice.

“DJ Juice is legendary, and I started listening to DJ Juice once I got on the yard in 1989 and I was getting tapes from some of my partners,” said Leonard. “He is truly the godfather of mixtapes. From there you got Kid Capri, Rob G, Funkmaster Flex and DJ Clue. He is the forefather of blending mixtapes. A lot of these guys talk about mixtapes now, but DJ Juice blended.

“We wanted to give Winston-Salem State back that old school feel, that ‘90s’ feel. Nobody else wants to touch that but we definitely wanted to give it that feel and have the alumni reminisce about the good days. The 90s, for me, was the best time for music.”

Leonard and Reed were intentional about targeting the older demographic for their event. They know many of the homecoming events are for the younger generation, so they wanted to have something for the mature crowd as well.

“To be able to enjoy the atmosphere and go home safely is very important,” said Reed Jr. “Really just wanted to get back to just coming out, having a good time, embracing everybody and going home safely, and that’s the kind of event we like to put together.”

Reed and Leonard wanted to emphasize that their event will not be strictly hip-hop influenced. They said there will be a mix of R&B, soul, jazz, reggae, hip-hop and even go-go music played throughout the night.

“It’s going to be R&B first and foremost,” Leonard stated.

The S&L Group are intentional about promoting events that are centered around old school hip-hop and R&B. They feel that was the greatest era of the genre and want to continue celebrating that time in music history.

For more information about the event or to purchase tickets, please visit https://www.eventbrite.com/e/the-ultimate-ramily-homecoming-day-night-palooza-tickets-351170990887.

The post Local promoters have something for the grown-up and sexy crowd during homecoming appeared first on WS Chronicle.

Not your grandma’s Green Stamps