Letter From The Editor: We Will Not Be Silenced – Black Kansas Citians, We Got Yall’s Back

KC Defender's Editor exposes KC media's white supremacist hypocrisy - and ensures the Black community our organization will not back down. The post Letter From The Editor: We Will Not Be Silenced – Black Kansas Citians, We Got Yall’s Back appeared first on Kansas City Defender. 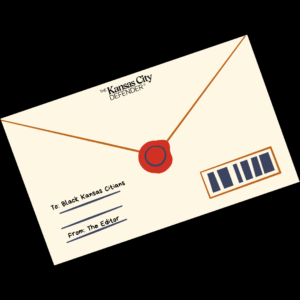 Recent reports of a serial killer allegedly kidnapping and murdering Black women in Kansas City sparked widespread concern. As a Black media outlet, we took these concerns seriously. We know that everyday Black women are kidnapped and murdered while white media outlets hardly, if ever, cover these stories.

When concerns of missing and murdered Black women initially surfaced, we responded quickly-but thoughtfully. We considered the fact that the concerns arose from a community organization located in the same area as the alleged serial killer. They also came from a respected Bishop in the community who had previously identified a serial killer in the Kansas City area before the police. In this case, community members spoke out against Terry Blair long before the police did. Instead, the Kansas City Police Department erroneously claimed one of the victims died of a drug overdose when, in reality, she was Blair’s murder victim. Working through these precedents of police and reporting neglect, we used our platform to voice and share these concerns so that people could be informed and protect themselves from any potential harm.

Our initial report wrote: “We are working to confirm and verify all of the information as we can. Please know we take these matters seriously and only want to report facts and not fearmonger. However given the very serious nature of the matter we believe it is critical to report this. Again, as a Black news outlet it is deeply important to us that we do not report misinformation, so we will update you as more facts come out… Until we get more details, we highly recommend our community members stay cautious and with increased alert and safety.”

The story gained traction, and white media outlets across Kansas City diminished these concerns. They said nothing until the police issued a statement, which the news outlets relied on as unquestioned fact. This is yet another example of how white media outlets perpetuate the false and violent notion that police are the arbiters of truth, and that the community’s voice is “unfounded” if it is not supported by police statements. Too often, white media contributes to a violent structure of ignoring, silencing, and marginalizing Black people in favor of reporting an “objective” truth that is only police-propagated narratives.

We are open about our tensions with the police because we are aware that the Kansas City Police Department has a long history of deceit and manipulation through the white press, particularly with regards to Black people. KCPD is currently under federal investigation for racism and discrimination, which further undermines their credibility in the community at large. Because of this, The Defender does not rely on police to confirm the validity of information. If anything, we consider the police to be an inevitably violent, racist and untrustworthy institution whose endorsement more often than not undermines a story.

In the tragic murder of Malcolm Johnson a year ago, major local news outlets, including The Kansas City Star (specifically Katie Moore), KSHB, FOX4, and others falsely reported that Johnson was armed and engaged in a gunfight with police based on police reporting. Community members and witnesses in the area discredited these “official” police claims, but news outlets continued to spread the rumors and lies given to them by the police. Crime scene footage eventually revealed that Johnson was unarmed and pinned down by three officers and was killed after one police officer shot another by accident.

When Malcolm Johnson was murdered and every local news outlet falsely reported that he was armed and involved in a shootout, not a single news outlet, reporter, or producer issued an apology. These media outlets have normalized the dehumanization of Black people and left behind an ongoing legacy of lies that were never corrected, revised, or apologized for.

This past March, Kansas City’s white press legitimized the attempted murder of 19 year old Black student, Jaylon Elmore of Olathe East, by referring to him as a “school shooter” and claiming he had a vendetta against the school principal (with zero evidence to support this latter claim). After parroting the initial “official police statement,” which included the lie that Jaylon had shot the SRO and principal, every outlet plastered the young student’s face across their platforms for a national audience to see. As Jaylon remained in the hospital battling fatal injuries, his family received death threats from those whose fiery hatred was stoked from the lies of the white press.

The Defender remained highly skeptical of this narrative and produced an investigative piece which doubted Jaylon had any motive and questioned the shooting. It was later revealed that not only did Jaylon not shoot the principal, but that the SRO was the one responsible for shooting the principal. For days following the tragic incident, students made signs and chanted “Free Jay” in the hallways of Olathe East, according to multiple students The Defender spoke with.

As with the case of Malcolm Johnson, white media did not apologize or show remorse, they did not plainly acknowledge the fact that the initial police report was a lie. They simply framed it as an “update” to an ongoing story, even after they demonized Jaylon in front of an audience of millions. Now, a Black student who was widely known as “fun and warm-hearted,” faces capital murder charges and will likely spend the rest of his life in prison in large part due to the violently irresponsible reporting of Kansas City’s white press.

That’s the difference between The Kansas City Defender and our city’s white news outlets: we go directly to the community while the white press go to the police. There is a reason why most Black people in our city trust us more than any white media outlet, despite the fact that we’ve only been around for a year. If you visit any of our social media platforms, you will not find blue check-marks verifying us for our reporting, but rather real Black people and those most impacted thanking us for the way we cover stories, for considering their lives and livelihoods and for providing immediate updates as they became available.

Our organization is young and will continue to grow. As a revolutionary news organization that vehemently rejects the white supremacist tradition of professional journalism, we are destined to face obstacles and learn from them. We believe this course of action is far more courageous than mindlessly adhering to “traditional” journalistic practices, such as regurgitating police statements. We are aware that this path will expose us to threats against our credibility, attempts to disparage our mission and purpose, and to undermine our integrity. However, our ancestors also endured comparable attacks. We do not anticipate a time when white media and those in positions of power no longer view us as an enemy.

We are not afraid, intimidated, or ashamed. We are encouraged by the positive responses and support we’ve received from our community, as well as their response to check on one another during this time of uncertainty. Even if the white media attempts to smear us for doing so, we will continue to listen to the community, uphold their concerns, and amplify their voices.

The post Letter From The Editor: We Will Not Be Silenced – Black Kansas Citians, We Got Yall’s Back appeared first on Kansas City Defender.

“Going Quiet”: Black Students and the Struggle to Keep Our Identities at White S...

Beneath the City: Black Business Owners Turn History in...

“Going Quiet”: Black Students and the Struggle to Keep ...

Guilty At a Glance: Megan Thee Stallion, Misogynoir, an...