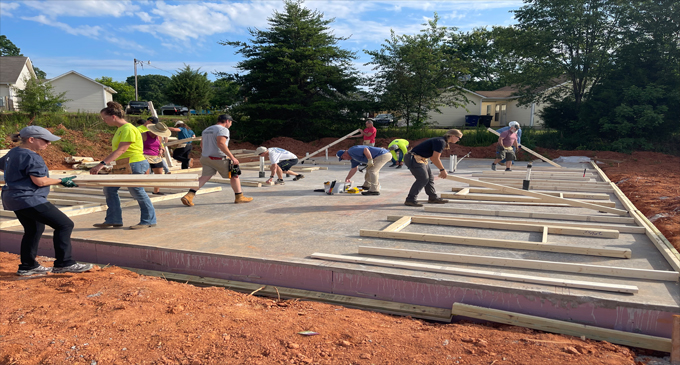 The City of Winston-Salem has set a goal of creating 750 units of affordable, or workforce, housing annually for the next ten years. But the leading builder of affordable single-family housing for homeowners in the city, Habitat for Humanity of Forsyth County, has produced only 430 units of workforce housing since the local Habitat affiliate started 37 years ago, a rate of about 12 houses per year.

That number is not a bad reflection on Habitat, which works hard against complex challenges. The number does, however, speak volumes about the mountainous climb the city and Forsyth County face in confronting this issue, which has too long lacked a concerted, community-wide effort: cooperation among the city, county and builders in private business.

“We’re in a crisis,” said Kelly Mitter, the chief operating officer of the local Habitat affiliate. “It’s a crucial matter of scaling up.”

At Winston-Salem State University’s Center for the Study of Economic Mobility (CSEM), Director Craig Richardson and Research Manager Zach Blizard have been studying the issue through the lens of the Forsyth County Homeownership program, which has in the past two decades placed almost a thousand families, often first-time homebuyers, in houses built by private contractors. But the program has a waiting list of almost 100 clients who have completed the program and are awaiting affordable houses.

How can this urgent supply-side problem ever be solved, before we start losing firefighters, police, teachers, biotech staff, restaurant employees and other bedrocks of our workforce to other cities, lowering our overall quality of life and inhibiting our ability to recruit new companies? Mitter, who moved here from California a decade ago, said we sure do not want to land in a situation that the state’s urban area faces, where many essential workers commute hours each day – if they stay in urban jobs.

Winston-Salem Mayor Allen Joines noted that Habitat builds single-family homes. To meet the goal of creating 750 units of affordable housing annually for the next ten years, he said in an email, “we will have to concentrate on multifamily projects,” adding that means rental and homeownership units. The city has spent just over $14 million so far this year in support of the building of 215 rental units of affordable housing at a cost to the city of just over $65,000 per unit, according to data compiled by Assistant City Manager Aaron King.

The other day, Mitter took me on a tour of some of Habitat’s work. The economic challenge, he said, is frustratingly simple: It costs Habitat about $100,000 to build a house. Ten houses annually, the pace COVID has slowed his agency to, costs about $1 million, money cobbled together from private donations and state and federal grants.

COVID, with its increase on building materials and stress on the pocketbooks of donors, is one part of the Perfect Storm raging on workforce housing. Another is out-of-town investors who have charged in, buying up houses in East Winston, where Habitat concentrates its work, and turning them into rental houses.

*Between 2001 and 2020, large investors from Texas and California purchased approximately 2,100 properties in the county.

*During the same timeframe, among large investor purchases, about 47% of the most affordable homes (less than $100,000) and 40% of homes between $100k and $200k were bought by investors headquartered out-of-state (all dollar values adjusted for inflation).

Simultaneously, few local builders do workforce housing because of the high expenses and the money to be made building houses for people of better resources, Mitter said. The sources of workforce housing – raw land, acquisition of infill lots (vacant lots in subdivisions and neighborhoods) and rehabilitation of existing housing – can all carry heavy costs.

On June 28, the Winston-Salem City Council adopted an Affordable Housing Program to encourage affordable housing that codifies new rules for the sale of city-owned land, made possible by action from state legislators from Forsyth County, the Winston-Salem Chronicle reported.

More is needed. Other North Carolina cities, Mitter said, such as Durham, have established small property tax increases for affordable housing, such as an extra penny.

Winston-Salem and Forsyth County could ease regulations to ease development costs to encourage workforce housing, Mitter said. They could also provide subsidies to help developers with infrastructure and other costs.

Mitter said the county could increase the use of foreclosure for in-fill properties.

Russ Smith, a CSEM research fellow and the faculty lead for the Spatial Justice Studio at the Center for Design Innovation (@CDI), said that is important. “We cannot continue to be so rigid in the allocation of space by economic status,” he said. “Neighborhoods need to have a mix of housing choices.”

Joines said low-interest subsidized loans, as well as using city-owned land as equity, will be part of the city’s effort.

Smith said: “Without deliberate actions by the public, private and nonprofit sectors, the goal of adding affordable housing locally will be difficult to reach. Affordable/workforce housing must be seen as a public good that will only enhance our community. New and innovative solutions that are not beholden to profitability will be crucial to addressing this issue since the private sector has not been able to fill the gap.”

The post Lack of workforce housing is crisis that demands a holistic effort – now appeared first on WS Chronicle.

The US Government’s Call for Deep Nicotine Reduction in...

Teaching scholars the love of reading