KCPD Said Missing Black Women Reports In KC Were “Completely Unfounded.” Less Than A Month Later, One Escaped After Being Kidnapped From Prospect & Tortured in a Basement For Over A Month

The bombshell revelations and horrifically tragic events explicitly disprove KCPD’s earlier statement that there are no missing Black women from this area and that the potential of a KC serial killer is “completely unfounded.” The woman also told investigators her friends "didn't make it out" and had been murdered by the man. The post KCPD Said Missing Black Women Reports In KC Were “Completely Unfounded.” Less Than A Month Later, One Escaped After Being Kidnapped From Prospect & Tortured in a Basement For Over A Month appeared first on Kansas City Defender. 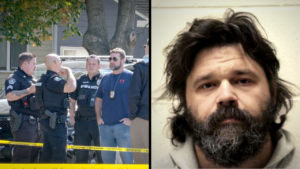 A bombshell multi-county investigation began last Friday when a 22-year old Black woman escaped bondage after being kidnapped, sexually assaulted, and held captive in the basement of an Excelsior Springs, Missouri man’s home. The man is identified as Timothy Haslett Jr., a white 39-year old male.

The woman was discovered around 8 a.m. last Friday, October 7th, when reports of a woman banging on doors and crying for help reportedly reached the police.

According to the Clay County Prosecutor Probable Cause Statement, T.J. reported that “Timothy had kept her in a small room in the basement that he had built. He kept her restrained in handcuffs on her wrists and ankles.” In addition, Haslett “whipped her while she was restrained…there were injuries on her back that were consistent with this description.” Court documents further say, “she was able to get free when he left to take his child to school.”

The official court documents also read: “Upon the [police] officer’s arrival at the residence, they found T.J. She was wearing latex lingerie and had a metal collar around her neck with a padlock, and duct tape around her neck. T.J. advised that a man by the name of Timothy picked her up on Prospect in Kansas City at the beginning of September 2022.”

In mid-to-late September, The Kansas City Defender published a video of Bishop Tony Caldwell, a local Kansas City community leader who was one of many in the Black Kansas City community who made reports of numerous murdered and missing Black women. In the video, Bishop Caldwell specifically identified that the women who were missing were being taken from an area on Prospect Avenue in Kansas City.

While the investigation remains early and more details will follow, there are now three major confirmed facts which clearly dispute KCPD’s earlier statements; (1) a Black woman was kidnapped, raped and tortured, (2) she was picked up on Prospect Avenue in early September (during the exact time-frame that community members began expressing concerns of numerous missing and murdered Black women in this exact area, (3) she said her friends “did not make it out” and were killed by Timothy Haslett Jr.

We spoke with Bishop Tony Caldwell who made the now-viral video and was first to publicly make the reports. He told The Defender;

“That was the description of the guy we were talking about and that was the location we said they were being taken from. That’s exactly what we were telling people. I’m just sorry that it took so long, but I’m grateful that she found a way out. I’m sorry people didn’t act on it sooner, and it’s absolutely tragic that the other young ladies didn’t make it. It’s horrible.

At first the police said there was no evidence of a serial killer or any young ladies missing.

We get a lot of information because we’re right on the street level. A lot of times we are even trying to give the police information so they can act on it, because the people in the street don’t trust them and now we can see that’s rightfully so.

The families are heartbroken and now they are even more mad. Because something could have been done back then. There’s a possibility their loved ones could have been saved if folks would have acted back when our community was first making these reports, instead of waiting for the young lady to escape. If she didn’t escape we would’ve never known, truly, we would’ve never known this was happening.

We asked Bishop Caldwell if he can tell us a bit about his background and how he has built trust in the community to receive information from the community such as this.

I’m over several churches, two in Kansas City, in California, and Arizona. A Community Center we started here in Kansas City, The Justice and Dignity Center, we opened it up because there was no true justice in the community, to handle cases like this. We take on cases that most people wouldn’t take on, or that the police won’t look into. We also have feeding programs, we work with the homeless, a Seniors First program working with senior citizens and helping feed them as well. Really anything from feeding people in the city to increasing economic opportunity in the urban core. We also work with the youth, many who used to be in gangs, but we’ve helped them get jobs and improve their lives.

Bishop Caldwell says he hopes this new revelation will cause the police, news outlets and community to take these concerns far more seriously, and to hopefully have a chance of finding the women who are still missing.

The Defender reached out to the Kansas City Police Department for comment on the recent revelations, and if the newfound evidence changed their previous claim that community reports were “completely unfounded” and “there is no evidence” to support the claim. Please read our correspondence below;

The Kansas City Defender: “Do you all [KCPD] still maintain the definitive conclusion that reports of additional missing women are “completely unfounded” and that “there is no evidence” to support such reports?

We can understand if you all arrive at the conclusion that ‘there is no evidence,’ if you all have not uncovered any such evidence yourselves, but your statement that such reports are “completely unfounded,” is the particular phrase we would like to know if you all maintain is true?

Our question is targeted at you all’s assumption that because your missing persons unit did not receive any reports of missing people, that such community reports are “completely unfounded” and that “there is no evidence” to support such claims. It appears that this case disproves the idea that such an assumption can be automatically deduced.”

Kansas City Police Department: “We base our investigations on police incident reports of criminal activity. We do still maintain that there is no indication that what you guys reported was accurate and there was no indication that there was anything that supported that claim. We share what information we can publicly, many times from the scene, of incidents of violent crimes when there is a report or an investigation underway, there had and has not been anything that corresponded to your reports on social media and the web which is why we refuted that report and said that the claims were unfounded.”

The department’s statement more or less states that if they do not have a missing persons report in their database on someone, that there is zero possibility that the person might be missing – or at the very least, that they have no interest in helping find them. Their statement that “we base our investigations on police incident reports of criminal activity,” makes clear that community concerns and testimonies mean nothing to them, even after such concerns are proven true, if they are not formally filed and accepted by the department’s missing persons unit.

How many more people have to go missing or be killed before the department admits it does not have a monopoly on public safety information and that the testimonies of folks in our communities are not “rumors” but important sources of information?

This is a developing story.

The post KCPD Said Missing Black Women Reports In KC Were “Completely Unfounded.” Less Than A Month Later, One Escaped After Being Kidnapped From Prospect & Tortured in a Basement For Over A Month appeared first on Kansas City Defender.

The Historical Context that Shaped Higher Education in ...

The Explosion of AI Artwork & Its Harmful Impact on Bla...