Edwin Buggage Editor-in-Chief Data News Weekly It is seventeen years later, and New Orleans continues to evolve into a city that is changing. Neighborhoods, schools, and communities are being reconfigured in ways that the traditional [...] 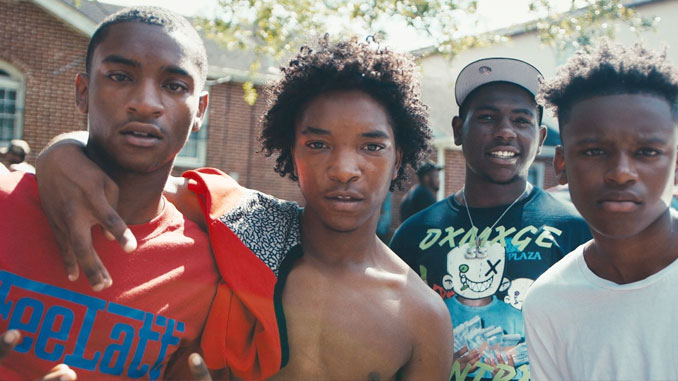 It is seventeen years later, and New Orleans continues to evolve into a city that is changing. Neighborhoods, schools, and communities are being reconfigured in ways that the traditional culture and landscapes are being altered. Beyond that, New Orleans most important asset, today, tomorrow and the future…its people, particularly its young are trying to find a new sense of normalcy in the city they call home.

As noted, young people are the future of the culture of a people. Edward Buckles Jr. is a native New Orleanian and filmmaker, who has created the critically acclaimed HBO documentary Katrina Babies, that premieres on August 24th. Data News Weekly had the opportunity to speak with him about the film, his life and mission to tell true stories of New Orleans and its people.

How a Young Man Feels in Love with the Arts
Today Ed Buckles Jr. name is ringing across the globe, but his story begins in New Orleans, a place that fed his soul, and is the creative gumbo that has given him his unique flavor and approach to filmmaking.

“I am from New Orleans and love my city,” says Buckles with excitement in his voice. “I started out at Anthony Bean Theater that is where I got exposed to the arts and storytelling. I eventually went to Dillard University where initially I studied theater but once I got the camera I fell in love with that medium.”
His love for the camera took him into a world where he began to document stories of his native city.

“I took what I learned and wanted to tell stories about what I saw in post Katrina New Orleans and some of the things I wanted to advocate for. That is where we are now, spreading awareness. I call it the gospel of what is happening in our community.”

Katrina Babies: Telling the Story of the Young People of New Orleans
The documentary Katrina Babies takes an intimate look at the aftermath of Hurricane Katrina and its impact on the youth of New Orleans. Buckles recalls the time when the idea for making this groundbreaking film.

“I was studying film and was taking a documentary filmmaking class and it sparked my interest in wanting to make a film. Then I received a call from my cousin who is still currently displaced in Shreveport. She called me and knew I was in the arts, and jokingly said one day she would allow me to read her diary and do a movie about it.”

“I asked what was in the diary? That is when she told me it was about her experiences during and since Hurricane Katrina and that of my other cousins who were children at the time. At that moment something clicked, and I started to draw parallels with what I experienced growing up post Katrina. Fast forward to today, we are witnessing the horrible state of New Orleans youth, the education system and all the things they are experiencing, and I began to wonder if anything that is going on with our youth had anything to do with what happened in 2005.”

Considering for all that lived through these horrendous times where people lost everything, and lives were changed forever. This is something that impacted adults, and especially children according to Buckles.

“How does a kid who was locked in an attic, or saw dead bodies, who thought they were going to die, who felt neglected, how does that carry on if it is never talked about or dealt with or ever being treated? I did not think that this was many people, why are these kids being blamed for being bad, when they experienced what they did. I just wanted to start that conversation.”

Believing in Oneself…Dreams Become Reality
While some may think Buckles success as something that has happened overnight, this is the culmination of seven years of work getting from the idea stage to HBO Max.

“I have had many mentors and support throughout this process. From family, friends, professional mentors and the people of my city, whose energy and spirit kept me going while making this film.”

“My mentor Chike Ozah, a New Orleans native and part of the filmmaking dues Coodie and Chike has been advocating for this film since we met. He spoke to Warner Brothers about this project. We had a meeting and they wanted to partner with us and my producer Audrey Rosenberg who set up the meeting. They made a quick decision in 2019 on my vision board that I wanted to partner with HBO Max and in 2020 it happened.”

Getting Love from Home and Beyond
Edward Buckles Jr. is becoming a household name in film circles with his first documentary receiving critical acclaim. A reality that is humbling to him, but also the fact that his city is giving him love for telling a story in a truly authentic way. A fact that is not always the case when people make films about the people and culture of New Orleans.

“It is very validating that my city is receiving it the way they have. We are a tough crowd when it comes to telling stories about us, and rightfully so, because they tell our story the wrong way and misrepresent us,” states Buckles.

When I first started making this project, I thought how would somebody outside of New Orleans relate to this story? But in fact, this is a very American story and a human story. It has been great to get this kind of recognition.

Making Impact…A Journey to Healing
The process of healing after trauma can be a long and hard process. Buckles speaks of how this film is more than a story, but therapeutic and hopes it can be the impetus of conversations centering on the mental health of children affected by Katrina, and the Black community more broadly.

“I never thought this film would or could bring healing. I grew up in a community where mental health and wellness and information was not available. When I first picked up the camera in the process how healing brought about the possibility of healing for me and other people. One of the most beautiful things I have heard is from young people who reached out to me and said they wanted to document their story, and now they feel good because I am doing it. I feel like I can heal, I feel heard, I feel seen and that has been a beautiful journey.”

“At the end of the day this project is about impact, this project is about changing conditions in our community especially the young people who are in a crisis right now. We see what happening with violence, you see what is happening with education and with mental health in our Black disenfranchised communities when it comes to young people. I want us to put together a plan and begin healing our youth. This film starts this conversation, but only a small piece of what will be needed to get us solutions.”

The Woes of the Black and Gold

Essence Fest is Back and Better than Ever