By Mike Cason | mcason@al.com Katie Britt won the race for U.S. Senate on Tuesday, becoming the first woman elected to the Senate from Alabama, a landslide victory that the Associated Press called soon after the polls closed. Britt, 40, defeated pastor Will Boyd, the Democratic nominee, and Libertarian candidate John Sophocleus, a former economics […] 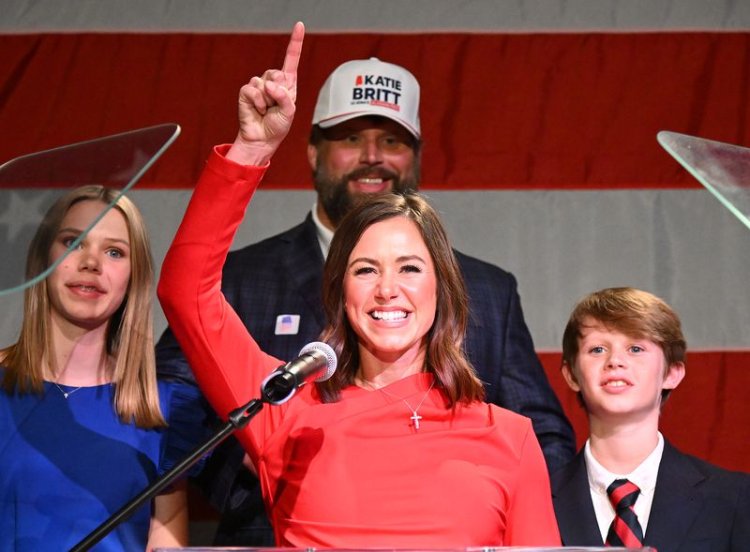 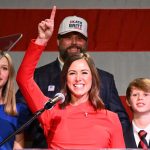 Katie Britt won the race for U.S. Senate on Tuesday, becoming the first woman elected to the Senate from Alabama, a landslide victory that the Associated Press called soon after the polls closed.

Britt, 40, defeated pastor Will Boyd, the Democratic nominee, and Libertarian candidate John Sophocleus, a former economics instructor at Auburn University. Britt had 67 percent of the vote to 31 percent for Boyd and 2 percent for Sophocleus with all 67 counties reporting, according to unofficial results reported by the secretary of state.

Cheering supporters greeted Britt at a celebration in Montgomery, where her husband, Wesley Britt, introduced her as balloons fell from the ceiling and the Brooks & Dunn song “Only in America” played. The Britt’s children, Bennett and Ridgeway, joined them on the stage.

Britt thanked supporters and said she would not back down from the historic opportunity her election represents. In addition to being the first woman elected to the Senate from Alabama, she noted that she will be the only female Republican with school-age children in the Senate.

“I don’t take any of these things for granted and the gravity of all of it is not lost on me,” Britt said. “I am humbled, I am honored and grateful. I want you to know I understand what a tremendous responsibility these milestones carry. And I do not take that lightly. But the one that matters the most to me is the first that we started this campaign with. It was our motto from the start: Alabama first.”

Britt said that was not a campaign slogan but a promise.

“And it is going to be my mission every day as your United States senator,” Britt said. “Like you, I truly believe that we live in a great state with great people. And I believe that our best days are still ahead.”

Britt will succeed Sen. Richard Shelby, who is retiring after representing Alabama in the Senate for 36 years, a career that saw him rise to positions of influence that enabled him to steer federal dollars and projects to the state. Britt was Shelby’s chief of staff from 2016 to 2018 and carried the senator’s endorsement and financial support.

Britt praised Shelby as “Alabama’s greatest statesman.” She said Shelby “has left a legacy, a lasting one, of fighting for this nation and an imprint on this state that will always remain.”

Britt talked about the importance of building a better future for young people and called 2022 “the year of the parent.”

“Tonight parents, families, and hard-working Alabamians across this entire state let their voices be heard. We said loud and clear, ‘This is our time,’” Britt said.

Britt supporters who had gathered at the downtown venue before the polls closed at 7 p.m. had strong praise for the candidate.

Wayne and Candy Hocutt of Tuscaloosa, who said they have known Britt since their daughters were in the same sorority at the University of Alabama, said they were not surprised she is on the verge of becoming a U.S. senator.

“She is everything that’s good about Alabama,” Wayne Hocutt said. “And smart. And she’s a superstar. She’s going to rise in Washington for a lot of years to come. So we’re excited to be here and celebrate with her.”

Gilda McEleney of Gadsden said Britt will bring the right mix of talents to represent Alabama in the Senate.

“She’s got experience because she worked as chief of staff, so she knows Washington,” McEleney said. “But she’s really very much from here. She’s got energy. She’s got youth.”

Britt noted that there were doubters when she announced her campaign in June 2021. She noted her low numbers in the early polls and said the election is “proof that the American dream is still alive.”

In the May 24 Republican primary, Britt led the field, winning a plurality in 62 of Alabama’s 67 counties. Britt won the endorsement of former President Donald Trump before the June runoff after Trump withdrew his endorsement of U.S. Rep. Mo Brooks, who was trailing in the polls. Britt crushed Brooks in the runoff, receiving 63 percent of the vote.

Britt built her campaign message on conservative positions including opposition to abortion, support for the Second Amendment and increased border security. She is outspoken about her Christian faith and has promised to be a champion for small businesses. She has maintained a large lead in fundraising over her opponents.

Britt grew up in Enterprise, a city of 30,000 people in southeast Alabama. She is the oldest of four daughters of Julian and Debra Boyd and said she learned about business and hard work from her parents, who had a hardware store, a boat business, and dance studios. She earned a bachelor’s degree in political science from the University of Alabama in 2004. She met her husband Wesley Britt at Alabama, where he played football before playing for the New England Patriots in the NFL.

“I am going to listen to you, not lecture you,” Britt told supporters tonight. “I know that every one of you is not going to agree with me on every single issue and that’s OK. I’m going to be working for all Alabamians, even those who have different beliefs than I do. I am going to be a voice for parents and families and hard-working Alabamians across the state. And I am going to work tirelessly every single day.”

Birmingham Mayor Woodfin to Testify Before Congress on...

When It Comes To The Metaverse, The Future Is Already Here