This issue is particularly pressing in the Black community, where decades of racist real estate practices, like redlining and block-busting, have kept our families in poverty The post Kansas City’s Rent Is Too Damn High appeared first on Kansas City Defender. 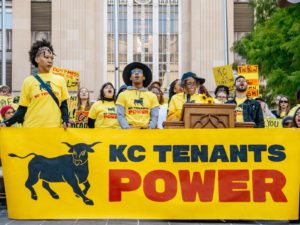 The rent is too damn high.

It’s been that way for a while now, but things are getting worse all over Kansas City. This issue is particularly pressing in the Black community, where decades of racist real estate practices, like redlining and block-busting, have kept our families in poverty and laid the groundwork for today’s housing crisis.

Black people are evicted more than white people in Kansas City, even when you hold income constant. Our neighborhoods are disinvested from, and we’re the first ones who are forced out when gentrifiers swoop in to build luxury studio apartments at rents we can’t afford.

The racialized nature of this crisis isn’t unique to Kansas City, but that doesn’t mean we should accept it as a given. Nationally, Black incomes are 60 percent of white incomes, but Black families hold just 10 percent of the wealth that white families hold. Two years of a pandemic and economic turmoil have inflicted more pain as tenants accrued rental debts, struggled to access adequate federal assistance, and were evicted from their homes. All of this fell the hardest on the Black community.

Right now Kansas City is at a crossroads. The World Cup, NFL draft, streetcar expansion, and a potential downtown baseball stadium– our city’s leaders seem desperate to copy the model of other cities, and that will be our downfall. They’ll say, “I don’t want us to be Denver…” while doing all the same things that made Denver a playground for tourists.

Where does this leave the barbers? The artists? The musicians? The construction workers?

Last year, rent across Kansas City increased 13%, and over 26% since 2020. KC Tenants recently surveyed households across Kansas City about the rent. 972 people responded, 88.4% of whom self-identified as tenants. They told us that they’re paying an average of $1400 in monthly housing expenses. The income required to “afford” that housing cost, using the federal and local standard of 30% monthly budget on housing expenses, would be $57,981 annually.

Incentives have gone to the likes of Mac Properties, a Chicago developer that began developing a corridor in Midtown in 2007. Between 2010 and 2021, the area’s Black population decreased by 21 percent. The only thing that trickled down to longtime Black residents like KC Tenants leader Pat Lucas was a 30-day notice to leave her home of 17 years.

KC Tenants, the citywide tenant union, is organizing to redefine affordability based on what we can actually afford, putting people before these profiteers. In August, the Mayor and City Council passed a law that loosens regulations for developers seeking public incentives… and defining “affordable” as $1200 for a one bedroom. Despite widespread outcry, City Council passed the policy, with the Mayor yelling at the City Clerk to continue tallying votes while KC Tenants leaders sat on the floor and chanted and one of our founders, Tiana Caldwell, was arrested.

In KCMO, Question 2 on the November 8 ballot will ask voters to pass a $50 million bond to fund truly affordable housing. Now KC Tenants Power (the political sibling organization to KC Tenants) is organizing to ensure that the $50 million housing bond on November’s ballot goes to housing we can actually afford. We wrote and passed a resolution through the City Council earlier this month that guarantees that every dollar from the bond funding will go to the housing we need, with rents between $550-$750.

I love Kansas City. When I go on a trip, the best part is when I get home, on the way from the airport, driving down 71, into the city, passing the light off 55th and Prospect. That’s the moment I know I’m home.

Does the Fed Investigation Into KCPD Mean Anything for...

Why Breast Cancer Is A Black Health Issue (And Resources...