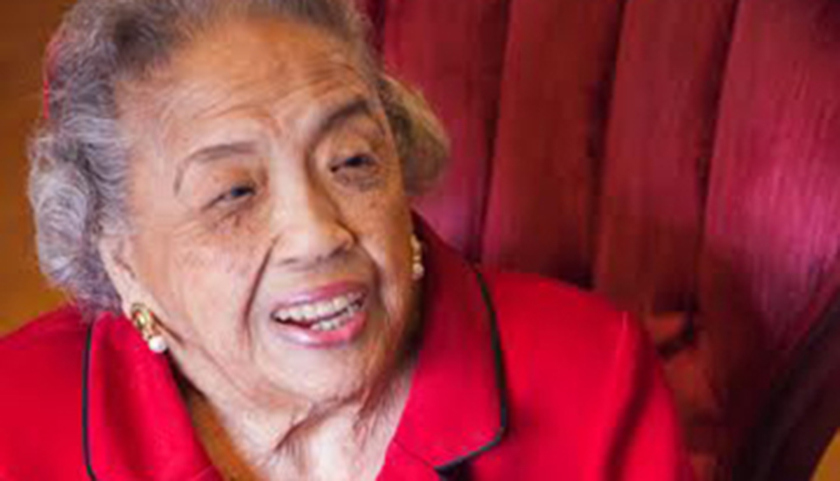 WASHINGTON (AP) — Cecilia “Cissy” Suyat Marshall, the wife of the late Supreme Court Justice Thurgood Marshall who worked alongside the civil rights champion at the NAACP, died Tuesday at the age of 94, the Supreme Court announced.

Marshall’s husband became the high court’s first Black justice in 1967 following a career as a civil rights lawyer in which he argued the landmark Brown v. Board of Education case that outlawed segregation in public schools. He retired from the high court in 1991 and died in 1993 at the age of 84.

Cecilia Suyat was born in Hawaii on July 20, 1928. She later moved to New York City and took night classes at Columbia University to become a stenographer. An employment office sent her in 1948 to work at the National Association for the Advancement of Colored People.

“The clerk, she saw my dark skin, and she sent me to the national office of the NAACP,” she said in a 2016 interview. “That is the only reason I can think of that she sent me to the NAACP for my first job. And to this day, I thank her, because had it not been for her, I wouldn’t have known anything about a race problem.”

Suyat, who was of Filipino descent, said that “having been born in the Hawaiian islands we never had that racial problems, and so working with the NAACP opened my eyes.”

It was also at the NAACP that she met her future husband. She worked on a variety of cases and was there for the case of the so-called Groveland Four, the four young Black men falsely accused of raping a white woman in Florida. She also helped take notes and type briefs as Marshall prepared for arguments in the Brown v. Board of education case, which was argued in 1952 and 1953.

In interviews later in life, she recalled the celebration after Brown was decided.

“I don’t know about you fools,” she recalled Marshall saying at some point during the festivities, “but I’m going back to work. Our work has just begun.”

Marshall’s first wife, Vivien Burey, died of cancer in 1955. He and Suyat married later that year. She left the NAACP after they wed.

But the marriage almost didn’t happen, she said, and not because of their 20-year age difference. She said many people still considered her to be “a foreigner,” and she worried about the reaction. “When Thurgood proposed I said, ‘No way,’” she recalled in 2013. She said he insisted: “I’m marrying you. I’m not marrying the country and they’re not marrying me.”

They had two sons, Thurgood Jr. and John. It wasn’t until just before Marshall joined the Supreme Court that the justices ruled in Loving v. Virginia that laws in 16 states barring interracial marriage could not stand.

In a statement, Chief Justice John Roberts called Cissy Marshall a a “vibrant and engaged member of the Court family” who regularly attended court events. “You wanted to sit next to her at any event,” he wrote. “She had an easy sense of humor that could be — in an appropriate setting, of course — a bit saucy.”

Justice Elena Kagan, who was a law clerk to Marshall, called Cissy Marshall a “marvelous woman” and wrote: “Every clerk to Justice Marshall received a sort of bonus: the steadfast friendship and support of his wife Cissy.”

The Supreme Court said funeral arrangements were pending. Thurgood Marshall was buried at Arlington National Cemetery in Washington in a section of the cemetery where a number of other former justices were buried.

NYC to Unveil ‘Say Their Names’ Memorial in Historical...