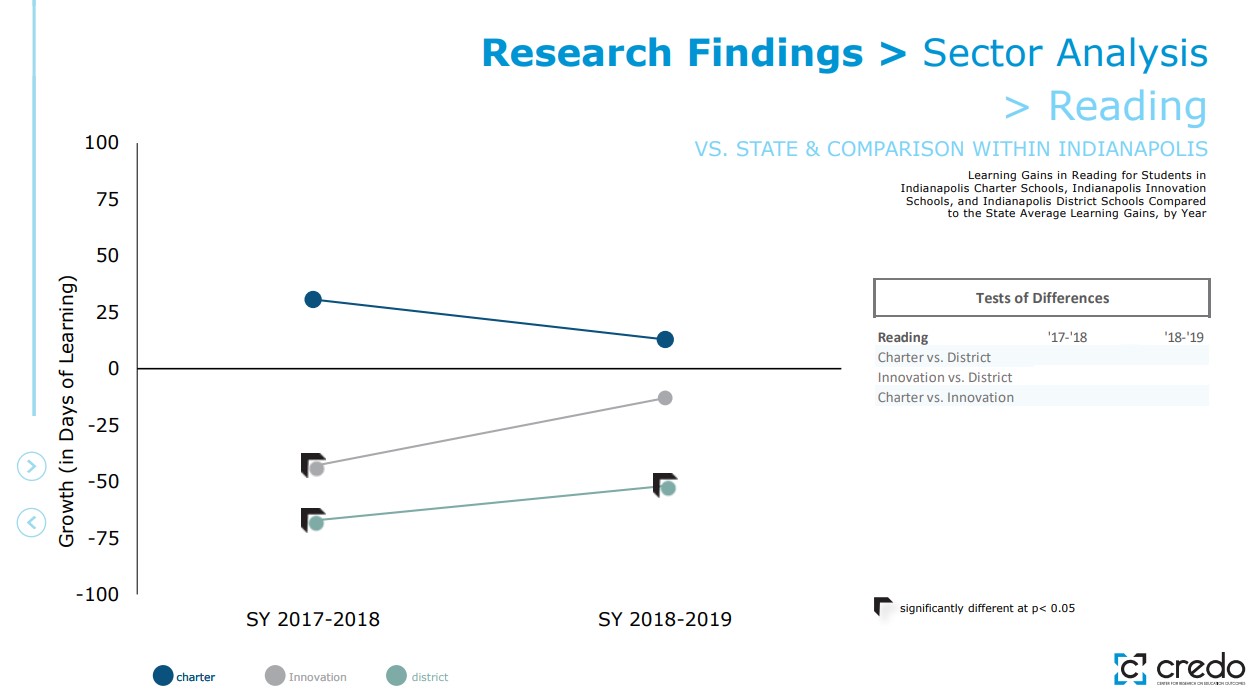 It’s the second analysis on the city’s school sectors by Stanford University’s Center for Research on Education Outcomes. This is part of the center’s ongoing research project on schools in select U.S. cities. Researchers used pre-pandemic data from the state’s standardized tests in the 2017-18 and 2018-19 academic years.

The study compares the academic growth of Indianapolis students at three types of public schools: charter schools, traditional schools controlled by the Indianapolis Public Schools district and innovation schools that operate autonomously within the IPS district through a special contract.

The study dissects academic performance outcomes among student demographics and the type of schools they attend. But like CREDO’s previous study on Indianapolis, the schools examined are not identified, nor are how many of each type of school are included in the analysis.

The authors’ findings on education in the city overall follow years of similar findings from state data: “Students in Indianapolis posted weaker learning gains compared to the state average in both reading and math” during each of the school years studied.

But Indianapolis students in poverty who attend charter schools showed stronger academic growth in math and similar growth in reading compared to the state average, according to the study.

CREDO’s own metric for comparison also found that students at Indianapolis charter schools gained more days of learning in math and reading during a typical academic year than similar students at traditional IPS district schools and innovation charter schools within the district. Other comparisons in the study include:

Joe Waddington, associate professor in the University of Kentucky’s department of educational policy studies and evaluation, said the study shows the outcome of different school types, but it isn’t designed to designate which school types are more effective.

Waddington, who has studied education outcomes in Indiana and was not part of the CREDO study, said people should be cautious of assuming the reason certain groups of students performed better than others is solely because of the type of school they attend.

“It might be that the needs of a certain school within a certain community look very different from one on the other side of town, even though they’re part of the same school [district],” Waddington said.

In a statement, IPS Superintendent Aleesia Johnson said the study provides insight into what works, and “fix where we aren’t delivering for students.”

Johnson is currently leading the district through a restructuring process that is expected to include closing schools. Johnson also wants to replicate curriculums with a proven record of success at some schools that will remain open.

“We are clear-eyed about the challenges facing both our district and our charter schools,” Johnson said in a statement. “We know too many of our students are not experiencing strong academic performance and their school experience varies depending on the school they attend.”

In 2015, IPS began partnering with charter schools, first as a way to restart failing schools, and then as means to share with established charter schools. Leaders at these schools have independent control of policies and academics while still being part of the district.

The Mind Trust — the Indianapolis education reform group that has spearheaded the growth of charter and innovation schools in Indianapolis — assisted CREDO in categorizing Indianapolis schools for the study.

“Now, it’s true that [traditional] charter schools are making the most academic progress. I think it’s important to remember that many of the new innovation schools are restarts of historically very low performing schools,” Brown said. “So I think it’s very promising that the innovation schools as a group are making more academic progress, while we also know there’s a long way to go.”

So far, the IPS district restarted nine schools with innovation charter agreements as of the 2020-21 academic year.

Innovation partnerships have become a focus in multiple school board election cycles and policy debates over funding. This year, IPS chose not to renew a contract with one innovation school and leaders at another decided on their own to close the school.

The state’s 2022 standardized test score data was released in July.

‘Let the World See’: Emmett Till and Mamie Till-Mobley...