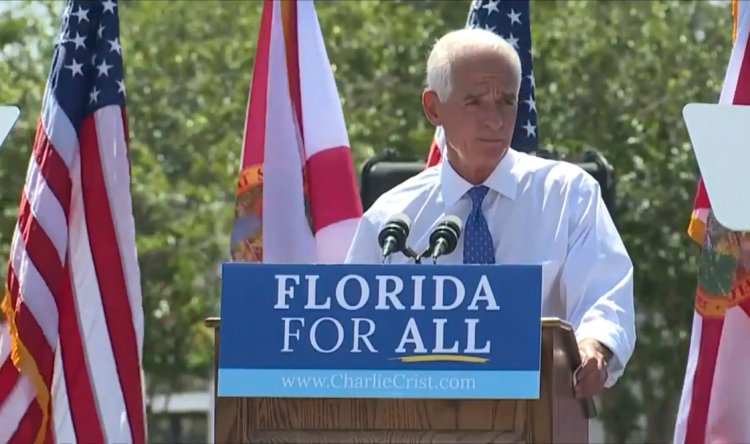 Former Republican Gov. Charlie Crist announced his second run for governor as a Democrat on May 4 in south St. Petersburg.

ST. PETERSBURG — Former governor and current U.S. Rep Charlie Crist announced on the 22nd Street Corridor yesterday that he wants his old job back in 2022.

Crist, who served as the state’s Republican governor from 2007-2011, switched political affiliation soon after and last made a gubernatorial bid in 2014, where he lost as a Democrat to Rick Scott. Crist, 64, currently represents Florida’s 13th Congressional District.

Addressing an outdoor crowd of supporters, he expressed concerns that it’s tough to thrive or even survive these days in Florida’s economy.

“Every year, the middle class gets squeezed by rent, by housing costs, utility bills, health care costs, student loan debt, and stagnant wages,” Crist said. “People of color continue to be systemically locked out of opportunity and equal treatment.”

He noted that Black and Hispanic residents are more likely to get COVID-19, die from it, and be unemployed during this pandemic. And they are less likely to receive a vaccine. The deck is stacked against the middle class, Crist said, “aided and abetted by Gov. Ron DeSantis and his Republican allies in Tallahassee.”

Not mincing words, Crist then told the crowd that DeSantis is a governor who “doesn’t listen, doesn’t care, and doesn’t think about you … unless, of course, you can write him a campaign check.”

Pointing out that the current governor has failed to lead during the most significant health crisis of our lifetime, he said local officials were forced to fend for themselves without direction from the state level.

“Scientists and doctors offered advice,” Crist said, “but he listened to quacks and conspiracy theorists.”

Crist also called out DeSantis for the way he chose to initially roll out the vaccines, claiming he steered vaccine shots to the wealthy white neighborhoods of his most generous supporters.

Referencing DeSantis’ recent signing of bills that would place new restrictions on voting and the right to assemble and peacefully protest, Crist averred that the governor has “waged a constant assault of democracy from voting rights to civil rights.” Unemployment benefits in the state are still some of the lowest in the country, he added, as DeSantis has promised tax cuts to the wealthy and well-connected.

Crist, a product of St. Pete High, acknowledged that there is division. and that we need “to bring our state together and finally open up opportunity for every Floridian because you deserve jobs you can live on, housing that you can afford, and justice that is truly equal.”

His plan includes protecting civil rights and human rights, along with voting rights.

“We won’t make it harder to vote,” he stressed, “we’ll make it easier to vote just as I did when I was governor.”

Peaceful protestors, women and their right to choose, and the LGBTQ community are among those whose rights he aims to protect. He also plans to expand Medicaid, “making affordable healthcare a human right.” Climate change is another component of Crist’s agenda, as he plans to name a chief climate change officer to “tackle the crisis head-on” and develop a statewide climate change plan.

“And we’ll develop a statewide energy plan, setting ambitious goals for renewable energy like solar and wind,” he said.

Concerning public schools, he aims to relieve students and teachers from high-stakes testing and said he would never cut Bright Futures Scholarships, a path for many Florida high school students to college.

Unlike DeSantis and the Republican leadership in Tallahassee, Crist said, he underscored that he would listen to his fellow Floridians, “whether it’s fully legalizing marijuana, raising the minimum wage to $15 an hour, strengthening background checks, banning assault weapons.”

“Black and Brown Floridians are treated fairly under this new administration when we win,” he said. “That’s what this is about — fundamental fairness for all.”

‘Jazz Fest’ set to deliver the flavor of New Orleans