On the ballot this election is an extremist, far-right piece of legislation which threatens to further extract resources from our communities. The post How Right-Wing Extremists Are Seizing Control of KC’s Police Department — And How We Can Fight Back appeared first on Kansas City Defender. 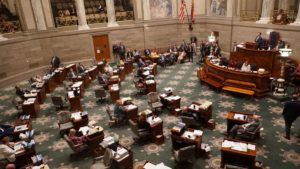 Not too long ago, the streets of Kansas City were lined with activists, community members, and faith leaders marching to the beats of “I can’t breathe” and “no justice, no peace.”

During this historic moment, there was heated debate about the future of Kansas City and the future of public safety. Some looked to maintain the status quo, where the police exercise a monopoly over our public safety resources with little to show for it. Others envisioned another future, one in which we invest in life and community resources like schools, housing, healthcare and education.

In the heart of the city, demands to invest in community continue to ring loud, but in the sea of our broader red state, the prospects for improved systems of justice and accountability are dismal.

On the ballot this election is an extremist, far-right piece of legislation which threatens to further extract resources from our communities in favor of gifting already severely bloated police budgets even more funding for surveillance, militarization and control.

If that sounds like it does not make much sense, that’s because it doesn’t. Amendment 4 comes amidst the backdrop of the Department of Justice launching a federal investigation into the Kansas City Police Department for racism and discrimination just two weeks ago, and the KCPD being ranked one of the Top 5 Worst Police Departments in the country.

In recent months, conservative politicians in Missouri have been quick to shut down any potential progressive gains from the 2020 uprisings, and weaponized such gains against working class and BIPOC communities in a game of political power grabs.

Earlier this year, Senator Tony Luetkemeyer, who does not live in Kansas City (represents Buchanan and Platte Counties), authored the bill. Luetkemeyer drafted the bill in response to blatantly false allegations that Kansas City Mayor Quinton Lucas and Kansas City council attempted to defund the police.

Eventually, the bill was adopted by the state legislature and signed into law.

In addition to being at odds with the people of Kansas City, extremists like Luetkemeyer mislead the community about the impacts of Amendment 4. They make false and unsubstantiated claims such as that by increasing the police budget, crime will be reduced. Nowhere in the country has this logic been proven over a prolonged period of time, and in Kansas City the exact opposite has occurred. Over the period of 2012-2018, KCPD budget increased 24%, while the violent crime rate increased 47% over the same time period.

To make things worse, the ballot language itself falsely claims that increasing the budget will incur no cost to Kansas City. In reality, to meet this new minimum budget, Amendment 4 requires the city to spend an additional $38 million that will require significant budget cuts to other city services. The divestment from community services in favor of the police extends the reach of an already violent, racist institution, which will use the funding toward increasingly militarizing the police and further terrorizing Black and brown communities.

Derek Buford, a leader with Decarcerate KC says, “I’ve been canvassing around town for about a month now and I’ve been bringing up amendment 4 to see how folks feel about it. A lot of people would rather see money go toward life affirming institutions like healthcare…I think if we’re concerned about the safety of our communities, we should be thinking about the well being of the people in those communities.”

In the fight for decarceration, this amendment directly contradicts our mission of dismantling and ultimately ending unjust systems of incarceration in Kansas City. As many call for an increase in life-affirming community services as an alternative form of public safety, this amendment disregards our well-being and instead redirects funds away from these services into a failed system of ongoing violence.

We refuse to sit back and be silenced. And this time, the fight involves voting no on amendment 4.

The post How Right-Wing Extremists Are Seizing Control of KC’s Police Department — And How We Can Fight Back appeared first on Kansas City Defender.

Does the Fed Investigation Into KCPD Mean Anything for ...

Letter From The Editor: We Will Not Be Silenced – Black...

Stop Telling Black People Not To Riot Over the State-Sa...