“Going Quiet”: Black Students and the Struggle to Keep Our Identities at White Schools 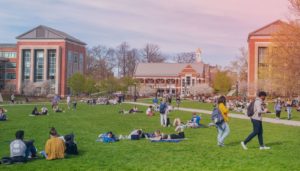 When I was in eighth grade, I used to practice the art of “going quiet”. Every morning after getting off the bus, I pulled out a dull black marker and wrote three little words along my right wrist: “go quiet today.” And indeed, I would try. On these mornings, I would make it my goal to go the entire day without speaking, or if I did, to make the sound as gentle as possible.

I genuinely believed there was something wrong with the way I spoke, something too harsh, too aggressive, too pushy, too overzealous. I practiced “stepping lightly into the world”, a phrase which simply meant taking smaller, softer steps, even at the expense of being left behind. Luckily something always stopped me from achieving these goals, whether it was a joke from a friend, a teacher talking to me, or simply my own eighth-grade- esq forgetfulness. Fast-forward five years later, and I find myself once again back in that same cycle : trying to be palatable for an audience who has no interest in digesting me.

I started college at a PWI, or Predominately White Institution, in the fall of 2022. More specifically, I packed my bags and moved from Kansas City to the east coast for the University of Connecticut, or UCONN. In my process of moving across the country, I often thought of a quote from Saeed Jones, a gay black male who moved from the south to east coast for college.

“ …Of course I wanted to see the world, to experience its fullness. I wanted to be a real part of it, rather than the passing shadow I so often felt like. I wanted to devour the world.”

During my first weeks of college, however, I have felt as if the world is devouring me. My school culture consistently imprints that this environment was not built for me. It’s not always slurs or outright aggressions against my differing identities: it’s the little stings that make a culture of osterizism. It’s the playing of “ Revolution” by Kirk Franklin to introduce UCONN’s football team to a predominately white audience. It’s the heart sinking realization that we have less than five cheerleaders who are black and none with my 4C hair texture. It’s a kid in my predominately white political science class saying the treatment of Brett Kavanaugh during his senate confirmation was the same as Justice Ketanji Brown Jackson’s. It’s the fear of doing my hair because I don’t know if I’m confident enough to love my hair in an environment with no representation.

This is more than just a personal battle with my identity: this struggle exists all across the University of Connecticut. According to The UCONN Racial Microaggressions Survey,” over 40% of students reported racial microaggressions that related to their intellectual aptitude.” Black students are often made to feel as if we got into this school off of luck or affirmative action, and often deal with our intelligence being questioned. On a daily basis, I deal with my peers being surprised that I’ve done an assignment before they have or that I even did it at all. Moreover, 30% of students reported feeling as if they need to minimize their race or ethnicity in order to fit in at UCONN.

The previous statement exists beyond myself and beyond Uconn: it’s called forced acculturation. Forced acculturation is “the process by which an individual learns of and begins to express the values, principles, and behaviors of a group to which the individual does not belong.” Although acculturation can happen naturally in some environments, in a PWI it is often a student of color’s only mechanism of survival. The implications of this are dire. In searching for education and a better life for our families, how many black students have lost key aspects of our identities along the journey?

In trying to build new lives, how many of us can no longer remember who we were before PWIs changed us? It is essential that we begin to find concrete solutions for supporting black students. This should look like policy advocacy, holding schools accountable for anti-black actions, and increasing mental health access in our communities. I, for one, will spend my four years at this school fighting to make it a place where those who come after me can feel safe .

I wish that I could end this article by saying that it gets better. I wish I could say that eventually black students begin to ignore the standards PWIs set and become authentically themselves. To an extent, I’m sure it gets easier from here. But easier will never mean painless. The fundamental fact is that some Black students will lose a part of ourselves in these institutions. Eventually… some of us will master the art of “going quiet.”

The post “Going Quiet”: Black Students and the Struggle to Keep Our Identities at White Schools appeared first on Kansas City Defender.

Letter From The Editor: We Will Not Be Silenced – Black Kansas Citians, We Got Yall’s...

Does the Fed Investigation Into KCPD Mean Anything for Black People or the Broader...