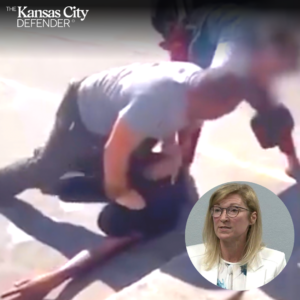 Jackson County’s top prosecutor, Jean Peters Baker, has become the target of violent white supremacist death threats after declaring that the Black woman who shot 41-year-old Anthony Santi would not be charged due to Missouri’s ‘stand your ground’ law.

On Oct. 6, Anthony Santi entered an altercation with 23-year-old Ja’Von L. Taylor. Santi proceeded to attack the 23-year old, with witnesses saying they heard Santi say “I’m killing you,” as he strangled Taylor unconscious. Santi was shot in the back by Taylor’s girlfriend, court records show.

The video of the incident has now gone viral reaching well over 15+million views across social media and causing large-scale controversy. There appears to be a consensus among many Black social media users that the white man had no business interfering with Taylor’s conversation with the cashier at the gas station – the same social media users say the girlfriend rightfully defended her significant other.

The Prosecutor’s office released a statement along with the disturbing audio listed above, find it below;

Although we do not typically release statements on declined cases without new facts, we are now compelled to do so because of the circumstances that have occurred this morning. Our office has received numerous phone calls with offensive racist and sexist language. These phone calls also include violent threats to our employees and the elected prosecutor.”

The facts of this case show that the victim of the shooting followed a man out of the store to his car following a verbal exchange between that man and a store clerk. Once outside, the facts specifically demonstrate that the shooting female fired a single shot in defense of the man who was being strangled. Her statement and actions were supported by an independent witness. That witness, who has professional medical training, described the man who was being choked as “totally defenseless.”

The witness noted that this man “couldn’t talk, couldn’t breathe [and] he was turning purple” and his “eyes rolled back into his head.” The witness believed that he heard the victim of the shooting say to the man he was choking, “I’m killing you.” Finally, the witness said that the shooter was “begging him to stop” and her ”hands were shaking.” These statements and video evidence from the convenience store support the defense of others provision as codified in Missouri law. Because of this, as stated, Missouri’s self-defense and defense of others law required that this case be declined

This is a developing story.

Why Breast Cancer Is A Black Health Issue (And Resources...

Letter From The Editor: We Will Not Be Silenced – Black...