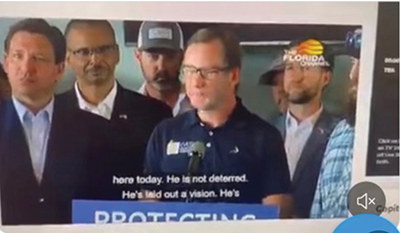 At a recent news conference in Fort Myers, Everglades Foundation CEO Eric Eikenberg referred to those he disagrees on water issues with as “knuckle draggers.”

This comment is offensive to us in so many ways. Mr. Eikenberg and his organization have a history of attacking our Glades communities and promoting policies that would shutter local businesses and destroy our jobs. Their wealthy, billionaire-funded group has repeatedly disparaged the Glades communities when it suits their political agenda and have funded many efforts where the agenda is always the same: spread misinformation about our people, rural cities and towns and then attack our rural, farming communities with destructive policies in Tallahassee and Washington.

Sadly, this isn’t even the first time Eikenberg has slung the highly insulting term “knuckle draggers” when disagreeing with residents of the Glades. In 2016, he was quoted by the South Florida Sun-Sentinel when criticizing our very real concerns over taking more farmland out of production and losing jobs by saying, it “is “the knuckle dragger’s argument to not tackle the issue.”

A recent ugly precedent was set when a Memphis meteorologist used this racist term and found himself in hot water. He suggested on Twitter that NBA star Draymond Green “runs his knuckle-dragging open mouth all game long.” After NBA and public backlash for the racist comment, the incident is being investigated, and the TV station has promised to take appropriate action.

Surely an educated and frequent public speaker like Eikenberg could have chosen a less racially charged phrase. But he decided to use a term that at best means “unintelligent” and “backward” and at worst, is a racist description in the ugliest of ways.

Mr. Eikenberg’s comments continue a disturbing trend where his organization and those they financially support, including Captains for Clean Water and the Sierra Club, make divisive comments in an effort to turn people against us. We have seen their agenda turn ugly on social media with folks threatening to “blow up the dike” that protects our communities from flooding, bring weapons to our doorsteps, and even destroy local businesses. In recent years, these threats have prompted us to get law enforcement involved.

Name-calling and dividing us will not solve water issues or any other social problems. Mr. Eikenberg owes members of South Florida’s African American community an immediate apology and needs to discontinue using this highly offensive and racist phrase.

Taylor is the President of Glades Lives Matter, an organization dedicated to advocating for residents of the Glades Communities. She is a former Hendry County Commissioner.