DOJ launches an investigation into Donald Trump’s actions leading up to Jan. 6.

By Stacy M. BrownNNPA Newswire Senior National Correspondent@StacyBrownMedia Former President Donald Trump may finally have to answer for his role in the Jan. 6 insurrection and his attempts to overturn the 2020 election.The U.S. Department of Justice has launched an investigation into Trump’s actions leading up to Jan. 6.The Washington Post and The New York […] The post DOJ launches an investigation into Donald Trump’s actions leading up to Jan. 6. appeared first on The Cincinnati Herald. 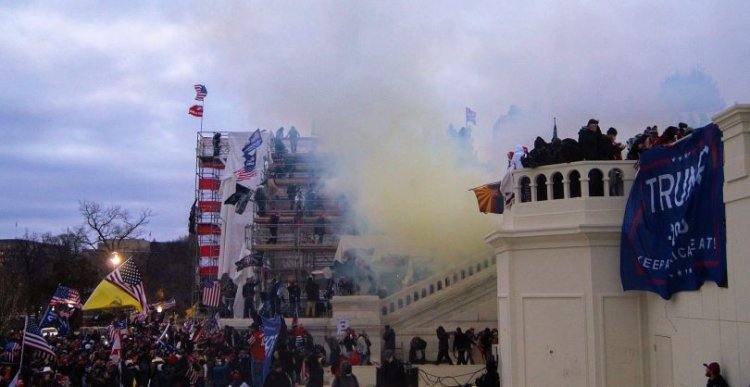 Former President Donald Trump may finally have to answer for his role in the Jan. 6 insurrection and his attempts to overturn the 2020 election.
The U.S. Department of Justice has launched an investigation into Trump’s actions leading up to Jan. 6.
The Washington Post and The New York Times cited several individuals familiar with the investigation in their reports.
The outlets noted that prosecutors had asked witnesses before a grand jury about conversations with Trump.
“Some of the questions focused on substituting Trump allies for electors in states President Joe Biden won and on a pressure campaign on then-Vice President Mike Pence to overturn the election, the newspaper reported,” the Post reported.
The newspaper said the Justice Department obtained aides’ telephone records, including former Trump chief of staff Mark Meadows.
The Department of Justice, a Trump spokesperson, and a lawyer for Meadows did not respond to requests for comment.
U.S. Attorney General Merrick Garland said in an NBC Nightly News Tuesday interview that “anyone” would be held accountable.
“We will hold accountable anyone who was criminally responsible for attempting to interfere with the transfer, legitimate, lawful transfer of power from one administration to the next,” Garland told NBC Nightly News’ Lester Holt.
The former President declared the election as fraudulent “right out of the box on election night before there was any potential of looking at the evidence,” former U.S. Attorney William Barr said in a taped deposition played by Committee members in June.
Matt Morgan, the Trump campaign’s general counsel, provided a videotaped deposition in which he noted that “the law firms were not comfortable making arguments that (lawyer and advisor) Rudy Giuliani was making publicly” about election fraud.
One lawmaker described Giuliani as “apparently inebriated.”
At the same time, Trump’s daughter Ivanka Trump and her husband, Jared Kushner, testified that the former President waited in the White House in a room with advisers while awaiting election results.
Meanwhile, Trump’s former campaign manager Bill Stepien, said his boss disagreed with those who suggested it was too early to call the election.
“They were going to go in a different direction,” related Kushner, who admitted telling Trump that “it was not the approach I would take if I were you.”
Following Joe Biden’s election win, Trump publicly declared himself the victor, and the Big Lie began.
He told supporters at the White House, including Barr, that a big vote dump had occurred in Detroit.
“I said, ‘Did anyone point out to you – did all the people complaining about it point out to you, you actually did better in Detroit than you did last time?” Barr stated.
The former attorney general declared, “there’s no indication of fraud in Detroit.”
Barr also put the kibosh on Trump’s claim of election fraud in Philadelphia.
“The President has repeatedly suggested there was some kind of outpouring of unexpected votes in inner-city areas like Philadelphia. That was absolute rubbish,” Barr stated.
Close Trump associates also pushed back against the former President’s damaging but false claims that the Dominion voting machines were rigged.
Barr called Trump’s allegations against Dominion “disturbing” and baseless.
Further, Kushner, Trump’s loyal advisor, told the Committee that he didn’t approve of Giuliani’s repeated “lies” during the 2020 election.
But Kushner declared that his father-in-law continued to speak favorably of Giuliani, even telling the inner circle that he had confidence in the former New York mayor.
When Trump claimed fraud in Georgia, his team members attempted to shoot down the declaration.
They pointed out Trump’s remarks that there were ballots in a suitcase in the Peach State. “The ‘suitcase full of ballots’ [turned out] to be an official lockbox where ballots were stored for safety,” BJay Pak, a former U.S. Attorney, stated.
Many have compared Trump’s Big Lie to former President Richard Nixon’s Watergate scandal that led to Nixon resigning in shame.
“Nixon sought to undermine the Constitution to assure that he would win the 1972 election and then covered it up, for which he paid the price of forced resignation. Trump sought to undermine the Constitution to overturn an election he had lost in 2020. He didn’t cover up his efforts, though exactly what was going on still hasn’t been told in full. Instead, he attempted to build his case on a foundation of lies,” Journalist and editor Dan Balz wrote in a column published on Jun. 13.
“Those who have studied Watergate see a line that travels from that scandal to the Trump presidency,” Balz continued.
“Part of this is because of the similarities between Nixon and Trump – the self-pitying nature of their personalities, the venality exhibited during their presidencies, the demonization of their opponents.”
Balz observed that Rep. Zoe Lofgren (D-Calif.) was a law student and legislative staffer to a Democrat on the House Judiciary Committee during Watergate.
He noted that today, she is a member of the Jan. 6 House panel investigating the attack on the Capitol and the broader effort to subvert the 2020 vote.
“We are in a political environment that is more sharply partisan than was the case during the Watergate era,” Lofgren told Balz.
“And you’ve also got people who lie with impunity and feel that there’s no downside to it. I mean, when Nixon was caught in lies, he resigned.”

The post DOJ launches an investigation into Donald Trump’s actions leading up to Jan. 6. appeared first on The Cincinnati Herald.

The Supreme Court Is Gutting the Regulatory State. Let's Look at Our Other Options.

Serena Williams to Speak at Black Tech Week in Cincinnati