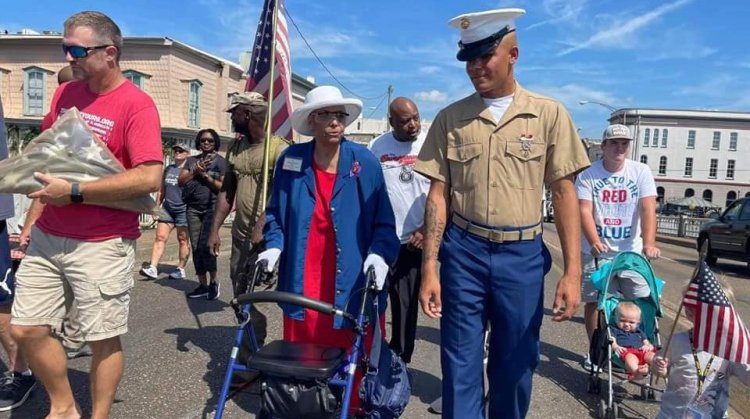 “I, too was honored as his Bride and for my fifty-four years of being an advocate for Gold Star Wives, Veterans and many programs that has lifted up residents”, said Patricia Barbee.

Barbee continued, “In front of us was the Selma Police Escort, many, yes many motorcycle riders sitting on wheels of different shapes and sizes. I saluted my Beloved wearing a “Marine Dress” adaptation.” To my left, the gent in the red tee-shirt is Jason Hanner of Omaha, NE. He flew in early morning. I’d never met him. He knew of the Barbees because he knows of John Ring, formerly of Richmond Hill, GA who walked from Tybee, GA to the Santa Monica Pier, CA 2019-2020.

Jason is carrying Marine Barbee’s Burial Flag.. Carrying “Ole Glory” is Retired Army Willie Thompson Jr. a Selma Resident who introduced the Barbees to the Selma City Council in the early part of 2022.

He was calling attention to the needs of Veterans and especially those in need of special care to prevent the suicides that are calculated to be “22 per Day”.

Ring and cadres of “Walkers” who have visited “twenty-two State Capitals” in February 2022 were there to “walk the Bridge”.. Yes, they formed again, this time to honor a Marine, that was one of Rev. Dr. Martin Luther King’s “Foot Soldiers”. Now, the Walkers are better known as “WalkforVets”. Rev. Barbee, was one of five pastors of Progressive Baptist Church, Nashville, TN. He was studying at Morehouse in Atlanta and worshiped at Ebenezer where Dr.King was pastor.

Barbee returned to Nashville and began the desegregation movement in that City. Barbee got a “Draft Notice”. It was to be a way to get him out of Nashville.

He did it his way. He enlisted into the Marine Corps and was at Parris Island the day before the Draft Board sent people looking for him.

Next, in the white tee-shirt is the IT Director, John Kinnerson, Jr, for the City of Selma.

Walking beside Mrs. Barbee is brand-new US Marine, Private Jaylen Knox who graduated 5 Aug 2022. Yes, the day before. Mrs. Barbee spotted him observing outside the staging and Speaker’ mini-park at the base of the Edmund Pettus Bridge on the West side.

She invited him to the fence and he was asked by many assembled to join the Walk.

A wee lad whose face is hidden behind a flag is just three years old and in four states had walked over eleven miles with his Family. He was given a special certificate before walking the Bridge.

After crossing the Bridge, all got a chance to visit the bronze plaques that mark that bit of history. Watching the movie, “Selma” one can see where we walked and trod.

10 questions about the FBI’s search of Mar-a-Lago

Some Post-COVID Era Jobs Are (Not) Here to Stay

Opinion: Why codifying Roe will land right back at the...