Bill Russell was a revolutionary

He lived authentically in love and determination – Rest in Power, Bill Russell The post Bill Russell was a revolutionary appeared first on San Francisco Bay View. 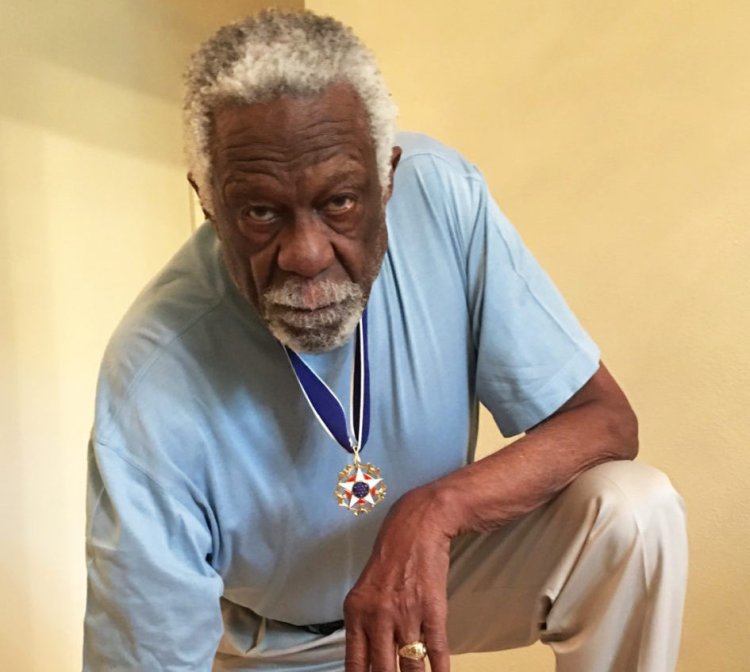 William Felton Russell revolutionized basketball with a simple innovation: jumping. In an era when players were told to stay fastened to the ground when playing defense, he jumped. And when Bill Russell jumped, he blocked shots. He blocked so many shots – while averaging an astounding 22.5 rebounds a game – that even though the blocked shot was not a stat that was kept during his day, it is widely assumed that he is the all-time leader.

Russell turned the blocked shot into an art form and played unselfish basketball en route to 11 championships and five MVPs in 13 years with the Boston Celtics. He also played a role in revolutionizing politics, and at this moment when the GOP is trying to roll back time – to in effect kill the reforms and memory of the Black freedom struggle – remembering his legacy is especially vital.

Russell flourished in a climate, both in Boston and around the country, that was relentlessly hostile toward him and his family because he was a famous Black man willing to speak his mind. Russell held a mirror up to this country. He once said, “We have got to make the white population uncomfortable, because that is the only way to get their attention.”

He believed that the discomfort he caused among white Bostonians in particular counted as progress, because they were far too comfortable with their own racism. Russell, of whom there is now a statue in front of the Celtics arena, was treated terribly during a career that spanned the core years of the Black freedom struggle. People broke into his home, scrawled racial epithets on the walls and even defecated in his bed.

He once told a story about his car breaking down in Boston in a thunderstorm and his being unable to flag down a ride but hearing people curse at him as they drove by. During the Russell dynasty, most Celtics games didn’t even sell out. That is why when his career was over, he said, “I am a Celtic, not a Boston Celtic.”

He believed that the discomfort he caused among white Bostonians in particular counted as progress, because they were far too comfortable with their own racism.

That is why he called Boston “a flea market of racism.” That is why he did not show up in 1972 when the team retired his number. But that is also why, when he reconciled with the team in 1999, and the fans stood and cheered, it was more than just a basketball honor.

This was a special person, the kind of human being who would walk alongside Dr. Martin Luther King at the March on Washington but then declined to be on stage, because he had no patience for celebrity culture and thought that if he stood at the front, he would be disrespecting those risking their lives to end American apartheid.

This quest to draw the good from this country by making the white majority uncomfortable was also seen in 1967 when Russell stood with Muhammad Ali, who was reviled for resisting the draft and refusing to fight in Vietnam. His solidarity led to one of my all-time favorite Russell quotes. A reporter asked him, “Are you concerned about Muhammad Ali?” Russell paused and responded, “I’m not worried about Muhammad Ali. He is better equipped than anyone I know to withstand the trials in store for him. What I’m worried about is the rest of us.”

He also famously would make autograph seekers uncomfortable, refusing – even when criticized for it – to be treated like a commodity or anything less than a full human being. I can say from experience that approaching Russell for an autograph was a mistake, but approaching him and sharing that you agreed with his political commitment? That would earn you a smile and maybe a friendly, infectious laugh.

Russell never stopped defending what was right. He took a knee in solidarity with Colin Kaepernick while wearing his Olympic gold medal, in a viral photo. In 2020, he spoke out in support of the NBA players who went on strike after the police shooting of Jacob Blake in Kenosha, Wis., backing them with moral authority and helping force the NBA and then most of the professional sports to almost entirely shut down in protest of racialized police violence. He would introduce himself as a civil rights activist.

Russell was a giant in the truest sense: fearless in the face of injustice – and never cared that he made bigots uncomfortable.

Dave Zirin is the author of several books, including “The John Carlos Story“ (Haymarket) and, most recently, “The Kaepernick Effect: Taking a Knee, Changing the World,” and sports editor for The Nation magazine, where this column first appeared. Visit and contact him through his website EdgeofSports.com. Follow him on Twitter @EdgeofSports.

Grand Jury Declines to Indict Woman in Emmett Till Killing

View from a playground in Hunters Point

6 Ways New Grads Can Standout and Land that First Real...