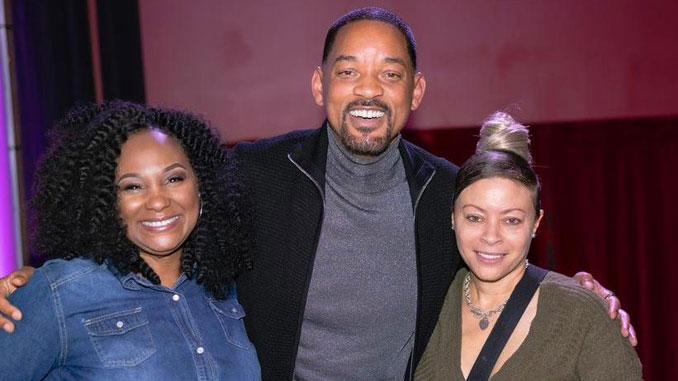 “Thank you, New Orleans! It was a life-changing experience filming #Emancipation in your backyard last year – and I was honored to be able to return last night to show the film to such an amazing, inspiring group of young people, the students from @dillarduniversity and @xula1925, and all the cast and crew who came thru!” Smith said in an Instagram post after he wrapped his visit to both campuses.

Emancipation is the first film starring Smith since the viral Oscar incident earlier in the year in which Smith slapped Actor-Comedian Chris Rock on the same night he earned an Oscar for Best Actor in a Leading Role for “King Richard.”

“Emancipation” is based on a true story of an enslaved Louisiana man named “Gordon” who escaped a Louisiana Plantation and found freedom after a treacherous journey to Baton Rouge. “Gordon” joins the Civil War effort in when he encounters the Union Army. The severity of his beatings and scars on his back was captured in an iconic image published in Harper’s Weekly in 1863 that galvanized public opinion on the evils of slavery.

The film is directed by Antoine Fuqua, and tells the story of Smith as “Peter,” a man that escapes slavery and is on his journey to freedom in the swamps of Louisiana, and who later joins the Union Army in the 1860s. The film is set to release on Dec. 2, 2022, in theaters and on Dec. 9, 2022, on Apple TV +.

This screening allowed students to get a firsthand look at the film while also being able to talk to, connect with the actor, and to hear directly from Smith about what the film meant for him.

“I had a great time at the screening,” said Jahliyah Readus, a freshman, Biology-Premed Major at Xavier University, who is a Jackson, Miss. native. “Being able to watch the movie alongside other HBCU students had a different effect on me than just watching it in a movie theater on my own,” Readus said of the exclusive event with the actor.

Students said they were able to get a better understanding of what slavery in Louisiana looked like. The film not only gave insight into an enslaved person’s point of view but the slave owners as well, they shared.

“The film was everything I expected and more,” said Aarinii Parms-Green, a freshman, Political Science Major at Xavier, who is from Baton Rouge, La. Parms-Green said she connected to the story because its real-life events took place in her home city.

“I expected to see a slave stand up to the slave master and possibly help create a rebellion while saving his family and running north to literal freedom, and emancipation, but I saw much more,” Parms-Green said. “It blew my mind to see the different perspectives of slaves, slave owners, and soldiers, and it just took the viewers on a fast-paced, blood-curdling journey that made you scream at how Peter overcame it all in the end successfully,” Parms-Green said.

Although this film was made to highlight slavery in Louisiana and many aspects of New Orleans culture, it teaches so much more, students said.
“My biggest takeaway from this film is the power of love and always fighting for freedom and equality can go as far as you are willing,” Parms-Green said.

“Peter endured immense struggles, from battling a gator to almost being caught, and being torn away from his family, but he never lost his will to fight because he knew he promised to return to his family, and he had unshakable faith in God. The power of the human mind is untouchable,” Parms-Green said of the film.

“Emancipation” was shot in the summer of 2021, with no expected release date due to the unforeseen events that took place after the Oscars. Since then, an official release date was announced and Smith has begun a more selective, closed promotion of the project, primarily in the state where it was shot. The film is also expected to be an Oscar contender for 2023 despite the Academy of Motion Picture Arts and Sciences banning Smith from attending the event for 10 years.

“Catch the flick on @appletvplus Dec 9th!” Smith said on his Instagram after his visit to New Orleans.