Police-on-Black violence like that experienced by George Floyd is absolutely nothing new. Over the centuries it has taken on many forms, but its outcomes have been consistent — unnecessary Black death.

“Floyd’s murder is the latest example of 400 years worth of terrorism against Black people,” said Kofi Taharka, chairman of the National Black United Front.

“The picture of Derek Chauvin’s knee on Mr. Floyd’s neck crystalizes that relationship, from the paddy-rollers who ruthlessly patrolled plantations to police officers who have served as the tip of the spear for safeguarding the status quo.

“I am not saying that all police officers are bad or that there are not genuine public servants in the police force. I am saying that in spite of them, the essential relationship between the law enforcement institution and Black people has been one of maintaining a racist social, economic and political order and protecting property.”

“Enslavement in this country was predicated upon and maintained by state-sanctioned violence against Blacks,” asserted Walker. “The U.S. police trace their roots to the armed militias formed to capture enslaved humans who escaped.

“Upon emancipation, the KKK and other white terrorist groups, heavily membered by police, judges and politicians, used violence to maintain social control and destroy Black economic competition. And each year and decade from the late 1800s to present, police have consistently over-policed, over-arrested, over-harassed, over-incarcerated and over-killed Black people.”

Walker added that during the Civil Rights and Black Power movements, local and state police coordinated with the nation’s highest policing organization, the Federal Bureau of Investigation, to purposefully attack, discredit and some say even murder Black leaders and organizations, primarily through its Counter-Intelligence Program (COINTELPRO) founded by then FBI director J. Edgar Hoover.

“The murders of Black Panther members Bobby Hutton and Fred Hampton are but two examples of many of local police departments using lethal force to control Black U.S. citizens.”

Each decade since the 1960s has had its own litany of examples where unarmed Blacks were sent to the grave while the police and others who put them there went unpunished.

Near the middle of the 2010 decade, the seemingly back-to-back murders of Trayvon Martin (by a neighborhood watch coordinator), Michael Brown and Freddie Gray gave birth to new efforts to confront this historical issue, including Black Lives Matter. Though BLM brough much-needed attention to a historic problem, police-on-Black violence continued.

According to Aljazeera.com, between 2013 and 2019, police in the United States killed 7,666 people according to data compiled by Mapping Police Violence, a research and advocacy group. In 2015, the Washington Post began to log every fatal shooting by an on-duty police officer in the U.S. in their “Fatal Force” project. In that time there have been more than 5,000 such shootings recorded by WP. This does not include Floyd’s death which was the result of a police knee to the neck.

The biggest change Taharka has seen over the past five years is modern technology’s ability to allow the world to see such injustices via cell phone video, as well as a newer, “fearless” generation of youth willing to confront them.

“However, I don’t see any change in the global system of white supremacy, not even the mildest form of change to attempt to answer the peoples’ righteous cries for justice,” he added.

For Nelson, the difference is in the nation itself.

“A demographic tsunami is transforming the country making it younger, more melanated, more liberal and less xenophobic. This is very threatening to the status quo which has taken on a reactionary posture. But the blatant and widespread acts of injustice by police officers against unarmed Black people are turning this demographic shift into a new political movement.

“Just like in the 1960s, there are many stresses on society at the same time, COVID-19, historic unemployment, economic collapse, police brutality and an insensitive and divisive presidential administration. This is a toxic mix that creates conditions that threaten the stability of the social order. All over the world, America 2020 is looking more and more like South Africa 1980.” 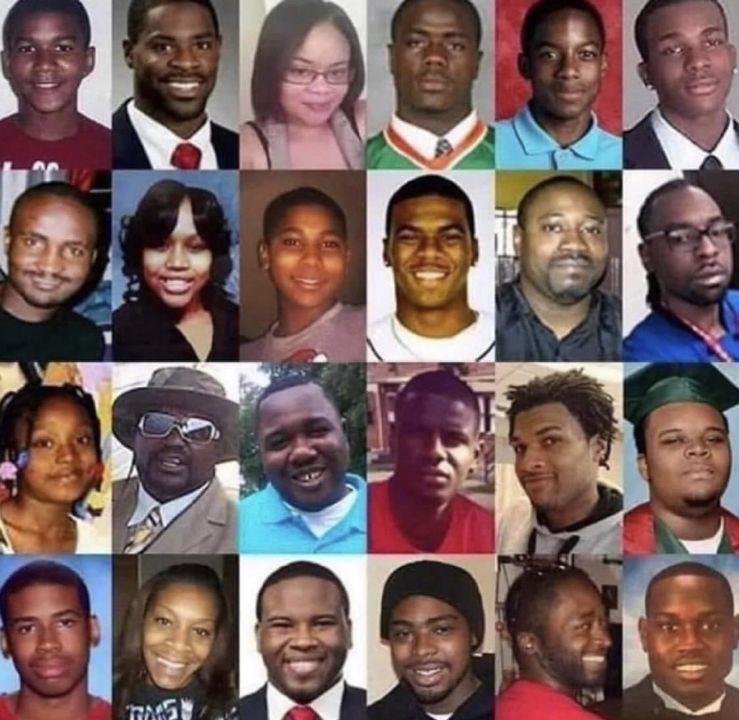 Here are some of the African Americans killed by police officers and private citizens.

TRAYVON MARTIN (Walking home with iced tea and Skittles. Shot by George Zimmerman, who was found not guilty).

KEITH SCOTT (Sitting in car, reading. Shot by police officer who was not charged).

ATATIANA JEFFERSON (Looking out her window, shot by police officer who is still under indictment for murder).

JORDAN EDWARDS (Riding in a car. Shot in the back of the head by police officer who was found guilty of murder).

STEPHON CLARK (Holding a cell photo. Shot eight times, six in the back. Officers not charged).

AMADOU DIALLO (While taking out wallet, officers fired 41 shots. All were acquitted).

PHILANDO CASTILE (Driving and pulled over. Shot by officer and aftermath live-streamed by fiancée in car. Officer found not guilty).

FREDDIE GRAY (Beaten to death by officers while being transported in police van. All officers involved acquitted).

MICHAEL BROWN (Shot 12 times by officer, including in back. No charges filed).

SANDRA BLAND (Pulled over for traffic ticket and arrested. Suspicious “suicide” in jail. No charges).

BOTHAM JEAN (Shot in apartment police officer mistook for her own. Officer found guilty of murder).

COREY JONES (Waiting by his disabled vehicle, shot three times by officer who was found guilty of murder).

AHMAUD AUBREY (Jogging, followed by father and son in truck and shot. Both men charged with murder, aggravated assault).

The post The death of George Floyd: A historical context appeared first on DefenderNetwork.com.