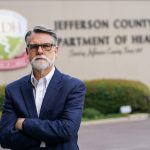 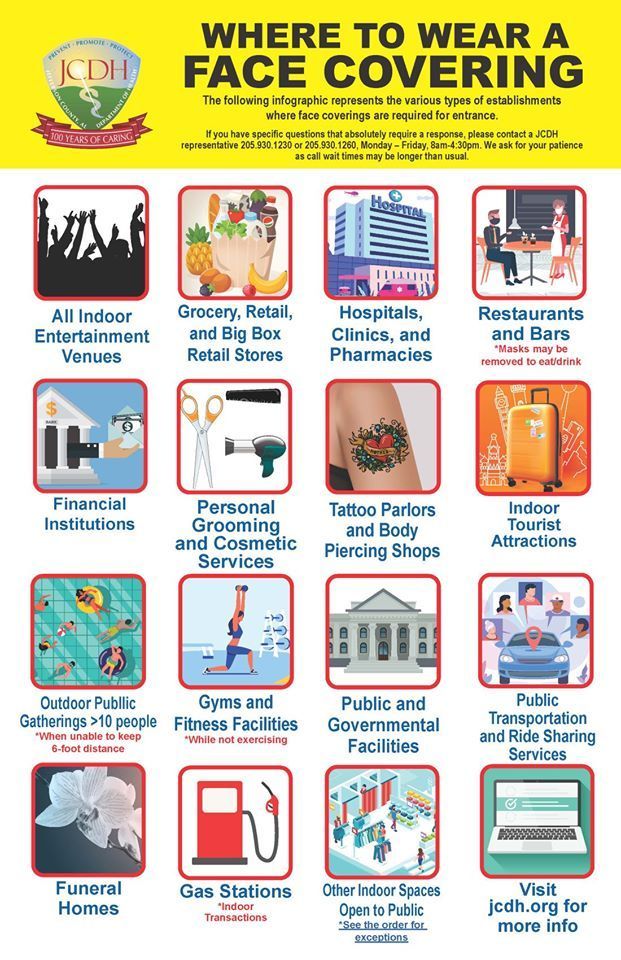 Jefferson County will require face coverings in most indoor public places beginning at 5 p.m. June 29 and lasting until the county health officer deems public safety no longer requires it in the fight against COVID-19.

Jefferson County Health Officer Dr. Mark Wilson announced the new order at a news conference today. Under the order, anyone over the age of 8 must wear a face covering inside virtually all public places in the county as well as inside any public transportation or ride-share vehicles. Face coverings will be required in outdoor spaces where 10 or more are gathered and unable to maintain separation of at least 6 feet.

A few exceptions include houses of worship, schools, and day care and child care facilities, which will have their own rules and guidelines.

“The spread of COVID-19 is getting worse in Jefferson County, unfortunately,” Wilson said. “Things are moving in the wrong direction and I’m very concerned.”

Businesses and venues open to the public must post a notice of the face-covering requirement at their entrances. The notice can be downloaded here.

“I’ve done a lot of thinking about this. I’ve been getting a lot of input about this,” Wilson said. “Unfortunately, it’s become a controversial issue and it really should not. This is public health, this is science, this is doing what’s right for our community based on the best information we have about how to protect people from the spread of disease. I’ve heard a lot of concerns from people about their personal liberty. I’ve also heard a lot of concerns from people who do not feel safe going into public places and they feel that their personal liberty has been limited because others are not wearing face coverings to keep them safe.”

Dr. Michael Saag, professor of medicine in UAB’s Division of Infectious Diseases and a COVID-19 survivor, said doing nothing will only see the number of cases continue to rise until an already stretched health care system could become overwhelmed.

“This virus doesn’t care about rules and ordinances,” Saag said. “It just wants to infect people and it’s pretty good at it.”

Saag said masks make those who are infected less likely to spread it to others by limiting the size of the environment around them that they infect.

“Think of an infected person as someone who has a cloud around them,” he said, noting that the size of the cloud depends on the level of face covering they are wearing.

Saag said those infected transmit the virus even when they don’t have symptoms. He said they are most likely to transmit the disease in the 24 hours before they become sick.

By doing what he calls the public’s “patriotic duty” to wear face coverings, Saag said hundreds of lives could be saved.

“But what I keep hearing is people saying, ‘It should be my decision about what I do. It’s my life. I should be free to make my own choices,’” Wilson said. “And I’m afraid that people are failing to recognize it’s not just about you, it’s about us. It’s about caring for others. Dr. Saag said it’s patriotic. I agree with that. I think it’s also just basic kindness and decency for our brothers and sisters in our community.”

Wilson said what amounts to a minor inconvenience for some to wear a face covering could result in a reduction in the transmission of COVID-19 by 50%, according to research.

“So, to me, from a science standpoint, from a medical decision standpoint and a public health standpoint, it’s an easy decision,” he said.

Wilson called on the public and the mayors of cities in Jefferson County to cooperate with the new order. He would like to see a similar order for the entire state.

“I think it would be great if this could be done statewide,” he said. “The entire state of Alabama is in trouble. I hope maybe we can get to that point.”

Saag said even if people in the state started doing the right things today, the cases will continue to rise for at least the next couple of weeks. That’s because those who were infected yesterday will likely not start to exhibit symptoms for two weeks.

“We’ve got a lot of work in front of us and we’ve got to work as a community to make that happen,” he said.

Saag said it’s demoralizing for health care workers who watch patients die from COVID-19 and then go out in public and see people not doing something as minimal as wearing a face covering to protect others.

“Frankly, that’s frustrating to me and I’d like to see it change,” he said.