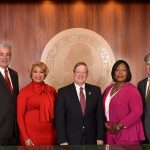 By Erica Wright
The Birmingham Times

The way of life may have changed for many during the COVID-19 pandemic, but constituent services haven’t, say members of the Jefferson County Commission. Much like their elected counterparts in Birmingham and other jurisdictions, the commissioners are finding different ways to govern and make decisions to best protect safety during this devastating public health emergency.

“This commission has been through tornadoes, bankruptcies, catastrophic loss of revenue,” said Commission President Jimmie Stephens. “Each crisis is different, but each calls upon the skills of the commission to address it. We’re in the process of working through this one.”

This one may present one of the biggest challenges for the five-member commission.

“The County Commission is still engaged in the everyday lives of its citizens, but the way we’re engaged has just changed right now,” he said. “Whereas people used to be concerned about a pothole or something like that, now they are more concerned about how . . . they are able to do business with the county.”

Stephens, who represents District 3, said he now communicates more with constituents over the telephone and via social media and video conference calls. The county also has website that is updated daily.

In District 1, Commissioner and President Pro-Tem Lashunda Scales has maintained a full schedule, assisting residents with unemployment benefits, getting to testing sites in her district, and donating to schools to help purchase adequate cleaning supplies. She always communicates “by way of video conferencing, [such as the Zoom platform], and teleconferencing.”

“[These platforms] have allowed my office to use technology to inform citizens, clergy, and business owners about critical facts surrounding COVID-19 and the various resources available to meet identified needs in a timely manner,” she said.

On Monday, Scales helped sponsor a free food giveaway at Cathedral of the Cross in Center Point where thousands of boxes of fresh fruit and vegetables were handed out to needy families.

Scales touted the health benefits of fruits and vegetables – specifically how those foods boost immune response – as the county and the country copes with the pandemic.

“COVID-19 attacks the immune system, and we want our citizens to be health and strong so that they can fight off this virus,” Scales told AL.com.

District 2 Commissioner Sheila Tyson said her staff has “passed out masks for our senior citizens and people with underlying illnesses.”

“We’ve also been helping with groceries, [providing] seven hot meals a week to the critically ill, feeding our children two times a day,” she said. “We’ve connected people with utility services for assistance and helped them file for unemployment.”

Tyson said her team has also provided Lyft rides to ensure that residents are transported to and from testing sites, started a prayer call-in line, and set up a domestic violence call-in line via Zoom, as well as provided new mothers with infant-care kits that include diapers, bottles, and books.

Tyson announced this week that county residents can benefit from the United States Department of Agriculture’s Farmers to Families Feeding program where more than half a million pounds of food will be delivered to sites across the county every week. Residents will receive a 20 pound box of fresh fruit and vegetables.

“This is special because so many families are in need because they are out of a job and this is such a blessing for them to receive the healthy food,” she said. “Some sites that are able will receive milk starting next week.”

Residents can dial 211 and provide their zip code for a site near them.

Commissioner Joe Knight, of District 4, said his goal has been to keep constituents informed.

“I’ve done that through Facebook and personal phone calls,” he said. “In the meantime, while all of this was going on, we had a tornado in April that touched parts of northern Jefferson County in April, so we had to deal with that.”

A lot of businesses in Knight’s district have also needed attention because of loss revenue from the pandemic.

“I’ve lobbied on behalf of those people who have fallen through the cracks for their payroll supplement, [as well as] people who work in salons or barbershops that haven’t been eligible for that because they’re like an independent contractor,” he said.

Commissioners are also working on a plan to set up countywide testing, get more masks and facial coverings, and put food-assistance programs in place, Knight said.

In District 5, Commissioner Steve Ammons has been communicating with mayors of cities and business owners across his district, including Homewood, Mountain Brook, Vestavia, Hoover, and Leeds.

“We’re really digging into how we help support them with the [Coronavirus Aid, Relief, and Economic Security (CARES) Act, which provides economic assistance to workers, families, and small businesses],” he said. “The county has received [some of this funding, $115 million] and is working on ways to best distribute that to help the most people.”

As chair of the commission’s Economic Development Committee, Ammons said one of his priorities during the crisis is to not only help people to find jobs but also provide training: “What training can we make available so they can get an even better job than what they already had?”

“We’re working with the Birmingham Business Alliance (BBA), as well as county community services and community development,” he said. “With unemployment being as high as it is, we’re working on ways that we can better help folks find jobs.”

Ammons said he is pleased by the adjustments being made by elected officials and citizens.

“The county and its employees and staff have continued to work for the people—and it’s all being done virtually,” he said. “I’m very proud of how the county has stepped into the 21st century and actually made it a priority to make sure we’re maintaining our services the best way we can.”

For more on Jefferson County’s response to COVID-19 visit: http://data-jeffco-al.opendata.arcgis.com/pages/covid-19-in-jefferson-county-alabama