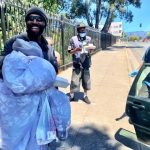 For the last six years, First Presbyterian Church of Oakland at 27th and Broadway has been aiding the needy and unhoused through their food ministry.

On Sundays and Mondays, a cadre of 20 volunteers (reduced from the usual 50 before the pandemic) prepared 150 hot meals that are both served at the church and distributed on the streets, said Food Ministry Operations Manager Bill Coburn.

The church gets the food they prepare from donations from Whole Foods, Manna From Heaven and Western Service Workers in West Oakland.

Distribution on the streets typically goes to a nearby homeless encampment, but on a recent Monday volunteer, Lexine Alpert saw that another organization had already brought food there, prompting her to find other places.

Alpert located a recent parolee after 33 years in Folsom Prison; a woman in an isolated tent, who, with her husband, had recently become unhoused and found living on the street scary and challenging.

Alpert and her son Nikos have decided they would try to serve those whose apparent mental illness makes it difficult for them to go to shelters or take advantage of programs like the one at First Presbyterian or St Vincent de Paul’s at 23rd and San Pablo avenues, which serves food five days a week.

“It is a pleasure to watch them being given and consume a good hot meal,” Alpert said.