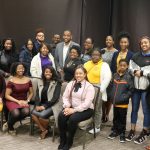 As the youngest member of the Birmingham City Council, Crystal Smitherman is firm in her belief that millennials and members of Generation Z wield extraordinary power in our current political system, both on a local and national level.

This past week, the District 6 office hosted a Millennial and Generation Z Voter Training Conference that was attended by college students from local and out-of-state universities.

“People always say that young people don’t care about the political process,” Smitherman said. “There’s a stigma that we only care about social media and going to parties. This weekend is about bringing together young people and having an open dialogue about voting rights, the history of voter suppression and how, we, this generation can make a difference in addressing the issues that we’re currently facing.”

Some of those issues include climate change and the need for transparent and representative government.

“I want young people to know their voice matters and their vote matters. If you want more people who are like you and care about the issues you care about, you can run for office,” Smitherman said. “I don’t believe that we have to ‘wait our turn.’ I want college students to know they can be the future they want to see.

In addition to hearing from speakers and holding discussions on topics like gerrymandering and Census participation, the attendees took a tour of the Birmingham Civil Rights Institute and City Hall, where they heard from local organizers and elected officials.

Leshundia Porter, the vice president of the Birmingham Urban League Young Professionals, said she wanted to be more informed of the voting process and how things like district lines are drawn so she could pass that information on to her peers.

“I’m hoping that we can come together and form a strategy to get millennials and young people more engaged in local elections because this is where we can make an immediate impact on the community,” Porter said during a luncheon at Birmingham City Hall. “Voting is important because, to me, I’m a customer. Our government is there to serve us. When I have issues, I feel like I should be able to come forward and voice those complaints… Right now, young people are so connected and have so much access to information on their phones. With that, I feel like we can push forward and make a change to the laws in this country.”

Most of the attendees were college students from across the Southeast. During the three-day conference they heard from speakers such as Aaron Greene, associate counsel with the New Jersey Institute for Social Justice and local activist Dejuana Thompson, who is the founder of Woke Vote, an organization aimed at eradicating mass incarceration, voter suppression, and urban gun violence.

On Saturday evening, attendees took part in a discussion with Huntsville City Council President Devyn Keith, who was the keynote speaker at the conference.

Keith, 31, spoke about his experience as a millennial working in local government.

“The most important part of what we’re doing here is mobilizing people and helping them realize the power of their vote, but also bring awareness to the issues we’re facing,” Keith said. “My hat goes off to Councilor Smitherman and the City of Birmingham for helping get the message out that not only do we have an equal right to vote but we have an obligation to impact the legislation that affects us every single day…I believe that the earlier you start teaching this, the more engaged young people will be.

“Speaking from my own experience, sometimes we’re unaware that everything or everyone you vote on affects you in every way that you live,” he said. “I think this younger generation is hungry for that and I hope they continue to hold every elected official accountable for their actions, myself included.”

As the conference came to a close and attendees began to disperse, Smitherman said she was overwhelmed with optimism for the future. “I’m hopeful,” she said with a smile. “These young people were so engaged and we had so many great discussions about voting rights and how we can make a difference. We stand on the shoulders of those who came before us and it’s up to our youth to continue that long march towards a truly just and equal system that works for all of us.”